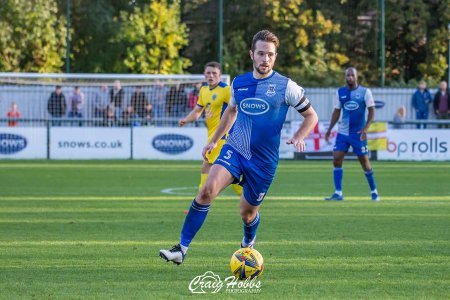 AFC Totton continued their promotion push with a tight 2-1 away win at Larkhall Athletic, despite being reduced to ten men.

The Stags continued their habit of scoring early goals; Hisham KASIMU taking advantage of a loose ball in the penalty area to stroke home.

Larkhall responded strongly, dominating possession for much of the first half, without any end product. KASIMU doubled Totton’s lead on the stroke of half-time against the run of play, stabbing in from Ethan Taylor’s cross.

Lewis Waterfield was sent off in the second half, with Dale EVANS scoring emphatically from the resulting penalty. Though the Larks pushed hard for an equaliser, the visitors stood firm to emerge on the winning side of a tempestuous encounter.