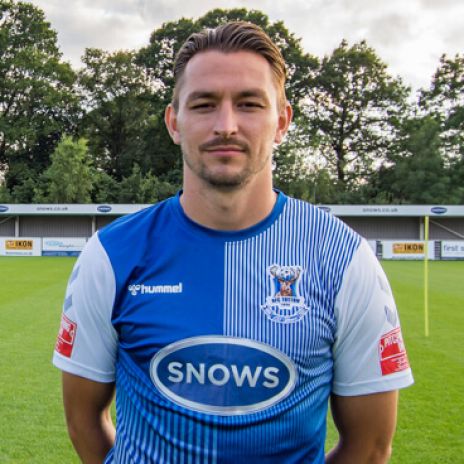 Brett Williams began his career at Eastleigh Football Club before joining Winchester City in 2008. However, in November 2008 he returned to Eastleigh on loan before signing a new contract in February 2009. In October 2009, Eastleigh received a club record transfer fee from AFC Totton, where he then played for one season before returning to Eastleigh for a third time after a successful one-month loan.

Brett joined Championship side team Reading on 18 January 2010 on an 18-month contract after a successful trial period, which included scoring for the Reserves and prompted Reading to pay £50,000 for his signature, amid rumoured interest from the likes of Southampton, Brighton & Hove Albion and Wycombe Wanderers.

The 2011/12 season comprised of two loan spells for Brett, firstly with Rotherham United until January, and then with Northampton Town, for whom he scored his first professional goal in a 1-2 defeat to Crawley Town.

In July 2012, Brett travelled up to Scotland for a one-week trial with St. Johnstone, but the Saints did not follow up their interest. So, the following month he signed for Conference National side Woking, on a season-long loan. He scored his first goal for the Cardinals in a 1-4 defeat to Braintree Town on 28 August 2012. He had to wait three months for his second goal in a 1-2 home loss to Alfreton Town in mid-November, and by the time Brett returned to Reading at the end of his loan agreement, he had registered 4 goals in 31 appearances in all competitions.

Brett was released by Reading at the end of the 2012/13 season, having never made a first team appearance in his two-and-a-half years with the Royals. After spending the summer as a free agent, he utilised the pre-season period to trial with Aldershot Town and signed a contract with the Shots just two days before the opening day of the 2013/14 campaign, going on to finish as the third highest goalscorer in the Conference Premier with 28 goals, and he remained at the Recreation Ground for the following season.

In the summer of 2015, Brett transferred to League Two Stevenage, but by November he was on the move again, dropping to the Conference National to join Forest Green Rovers on an initial one-month loan, which was converted to a permanent deal in January 2016 when Stevenage agreed to mutually terminate his contract to enable the move to go ahead.

The Rovers reached the 2015/16 National League Play-Offs. Brett scored the winning goal in the semi-final, first leg match at Dover Athletic to help his side to a Play-Off Final showdown with Grimsby Town. Brett started the match at Wembley Stadium but was on the losing side and, the following day, he was named among the players the club had decided to release.

Brett's next club was Torquay United in the National League, for whom he signed on 04 June 2016, and his goals proved vital to helping the Gulls survive the threat of relegation to the National League South. He moved to National League rivals Bromley for the first half of the following season, but returned to Torquay on 26 January 2018.

A short spell at Sutton United followed, a year later, prior to Brett joining Weymouth in June 2019. At the end of the 2019/20 season, Brett was part of the Weymouth side that beat Dartford in a play-off to secure promotion to the National League.

Brett joined the Stags in August 2020 and is now an integral part of the AFC Totton set-up. In addition to his duties as a first team player, Brett is manager of the Pro:Direct Academy Southampton programme, which is based at Snows Stadium, and he is also in the process of applying for his UEFA B Coaching Licence.

Making what was coincidentally his 100th appearance, including substitute appearances, for the Stags in the Final of the Southampton Saturday Senior Cup at St. Mary’s Stadium in May 2022, Brett found himself pressed into service as a goalkeeper, due to the Club’s three keepers all being injured in the lead up to the match. He managed to keep a clean sheet as AFC Totton defeated Folland Sports 3-0 to lift the trophy for the first time in 40 years.