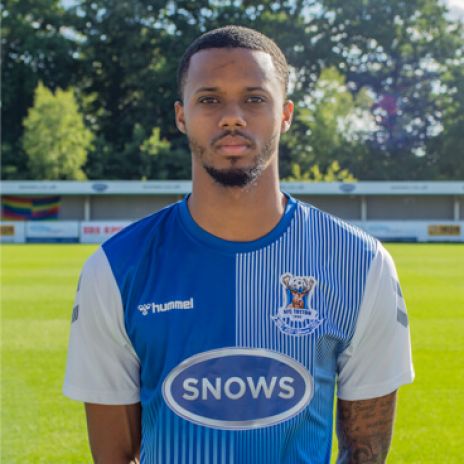 Tokia Enrique Zidane Russell Jr. is a 22-year-old striker from Bermuda, who signed for AFC Totton in July 2022 after a successful pre-season trial.

Although he was born and mostly-raised in Bermuda, part of Enrique’s education was in the UK at Sparsholt College, during which he played football for Hampshire Schools and impressed well enough to earn a place in the AFC Bournemouth Academy. But in 2017, he suffered an ACL injury while playing for the Cherries’ U18s in a friendly against MK Dons.

After recovering his fitness, Enrique had spells with Cheadle Town in the North West Counties League and Ilkeston Town in the Southern League Premier Division Central. In 2021, he played for Pembroke Hamilton Club Zebras – known colloquially as PHC Zebras – in the Bermudian Premier Division.

Since scoring on his international debut against the Bahamas in 2020, Enrique has gone on to accumulate a total of 6 caps and 2 goals for Bermuda. To date, he has been mainly used as a back-up player to the team’s talisman, the Bristol City and former QPR striker Nahki Wells, who is 10 years his senior. Prior to arriving at the Snows Stadium this summer, Enrique featured for his national team in the CONCACAF Nations League against Montserrat in the Dominican Republic, coming off the bench in a 2-3 defeat.

International football runs in the Russell family. Enrique’s late father Tokia was a defender, who won 8 caps and scored 1 goal for Bermuda from 2000-2004. His uncle Antwan Russell, a forward, also had a spell with Ilkeston Town during a career in which he represented his country on 11 occasions and scored 7 goals, while Enrique’s grandfather Earl Russell is widely regarded as one of Bermuda’s best ever footballers.

Was dual registered with Totton & Eling before going out on loan to Wessex League Premier Division club Brockenhurst.