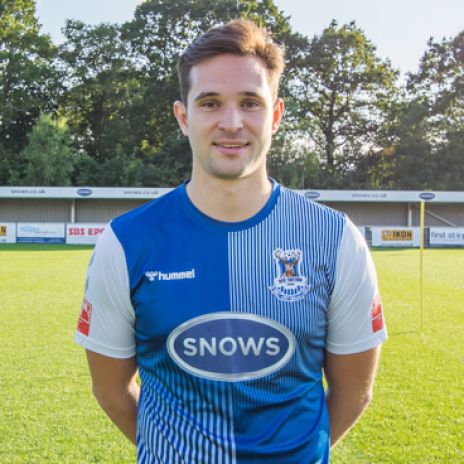 A product of the Portsmouth FC Academy, Harry had spells with Havant & Waterlooville – during which he came to AFC Totton on loan – Gosport Borough and Blackfield & Langley. His teammates at Gang Warily included Totton goalkeeper Lewis Noice and midfielder Adam Tomasso, as well as former Stags Ade Olumuyiwa and Sam Griffin.

Harry signed a permanent deal with AFC Totton in the summer of 2020. However, the first season of his second spell at the Snows Stadium was ended prematurely due to the COVID-19 pandemic.

The 26-year-old captained the Stags throughout the 2021/22 season, making 41 starts in all competitions. A solid centre-half who is comfortable in possession and has the ability to hit accurate long-range passes, he also offers an offensive threat from set-pieces as he demonstrated with the opening goal in the important 2-0 win at fellow promotion chasers Frome Town in February.

In May 2022, he had the distinction of being the first AFC Totton skipper to lift the Southampton Saturday Senior Cup for 40 years, after leading his side to a 3-0 victory over Folland Sports in the Final at St. Mary’s Stadium.