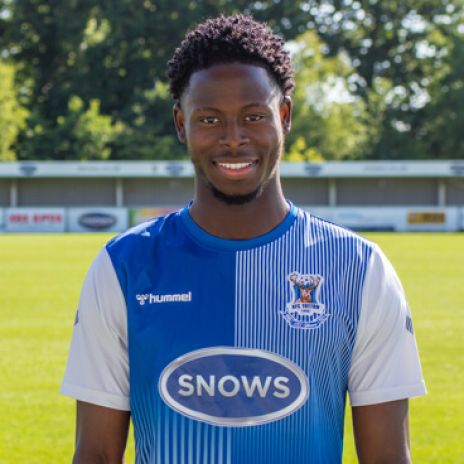 The player known by his teammates as JJ was born in the Maitama district in the north of the city of Abuja, Nigeria. Having moved to England as a child, he established himself as a regular goalscorer for the U14s team of Sporting Club Thamesmead from the London Borough of Bexley during the 2017/18 season.

He arrived on Jimmy Ball’s radar during a month-long trial at Stoke City, while the Stags boss was working as a coach in the Potters’ academy set-up, before going on to rise from the ranks of the Forest Green U16s to play the majority of last season in the New Lawn club’s academy team. He was in line to make his first team debut for the Green Army in a Papa John’s Trophy tie in October 2021, but injury forced him to withdraw on the eve of the match.

In May 2022, the 18-year-old had a trial with Huddersfield Town, playing 77 minutes for the Terriers’ U19s in a 0-1 defeat to their Walsall counterparts. The EFL Championship club decided not to offer him a contract, prompting Jimmy Ball to make his move for a player he has admired since their short time together in the Potteries.

Jireh was a teammate of Stags defender Luke Hallett when the two of them played together in the Forest Green Rovers Academy, prior to Hallett’s season-long loan with Gosport Borough last season.

Scored on his AFC Totton debut against Bishop's Cleeve on the opening day of the 2022/23 season and has also represented Totton & Eling as a dual registered player.