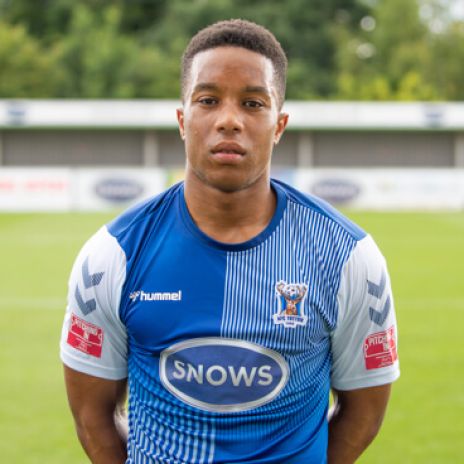 Jordan – whose surname is pronounced “Rag-gay” – had an extended trial with Brighton & Hove Albion before joining Gosport Borough. He was then with Isthmian Premier League side Lewes before moving to AFC Totton shortly into the 2021/22 season.

He made 23 starts for the Stags in all competitions throughout the campaign, plus 10 substitute appearances, scoring 6 goals. His strike during the 3-1 win at Slimbridge in the final league game of the season was arguably the pick of the bunch, while his best performance came in the Southern League Cup tie at Sholing in October, when he scored two goals and created a hatful of chances in a comprehensive 4-1 win.

Comfortable operating anywhere on the left-hand side, Jordan has worked hard to improve the defensive side of his game as injuries and suspensions to Ben Jefford presented more first team opportunities in the left-back position. But his ability to run at defenders and pose an attacking threat makes him suited to the wing-back role.

Jordan was born on the Caribbean island of St. Vincent and has represented St. Vincent and the Grenadines at U21 level on three occasions, scoring once. In the summer of 2022, he was called-up to a 30-man senior squad to attend a training camp in preparation for the CONCACAF Nations League. He was not selected for the subsequent 23-man squad that played the first four matches of the competition, so making his senior debut remains one of his ambitions. If his performances during the second-half of the 2021/22 season are anything to go by, it’s only a matter of time.