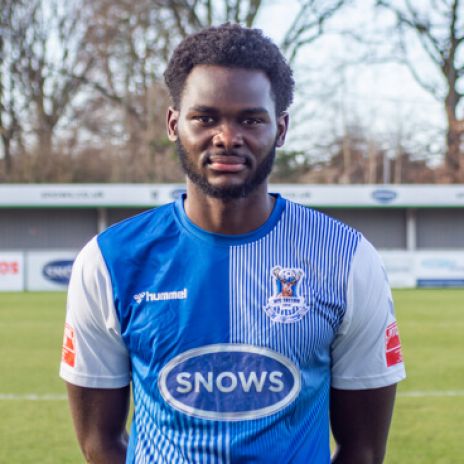 The 20-year-old Pascal – whose surname is pronounced “Ka-poo-ga-moo” – began his career in the Manchester City FC youth academy before being sold to Southampton in 2018 on a two-year scholarship. He signed professional terms upon turning 17, and regularly captained the Saints U18s before progressing to the U23s for 2020/21.

Capped by England at U16, U17 and U18 levels, Pascal counts the likes of Phil Foden and Bukayo Saka among his former teammates. After being released by Southampton in the summer of 2021, he had trials with several Championship clubs before short spells with Weston-super-Mare and Hartley Wintney in the Southern League Premier Division South, until an injury curtailed his involvement in November.

A cultured, ball-playing defender with a penchant for last-ditch recovery tackles, Pascal has lived in Totton since his Southampton days and took advantage of the opportunity to sign for the Stags in January 2022. He made his AFC Totton debut in the 13-0 mauling of Durley in the 2nd Round of the Southampton Senior Cup on Tuesday 11 January, and came on as a substitute in the Final at St. Mary’s Stadium in time to create his team’s third goal.