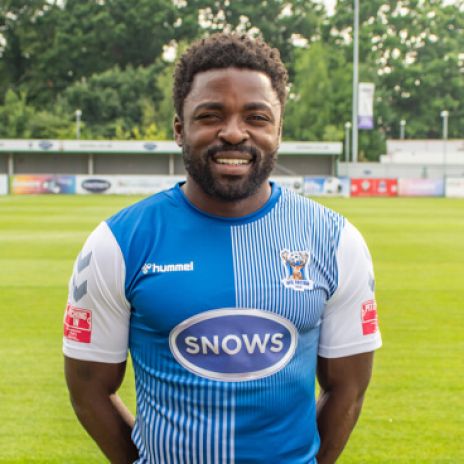 Yemi Odubade is 37 years-old but still possesses a blistering turn of pace. He plays mainly as a central striker but, able to strike the ball with both his left and right feet, he can also operate as a winger from either flank.

He was born in Lagos, Nigeria, but grew up in East Sussex after his family moved to England while he was a child. His football career began in 2001 with Sussex County League side Eastbourne Town, where he scored more than 70 goals for the Townies to attract the interest of Yeovil Town. He struggled to make an impact at Huish Park, though, and moved on to Eastbourne Borough the following season. Impressive performances in two FA Cup ties persuaded Oxford United manager Brian Talbot to pay a fee of £25,000 to take Odubade to the Manor Ground, where he stayed for three-and-a-half years, racking up 33 goals in 149 appearances.

Stevenage was his next port of call, following a free transfer in May 2009. His first goal for the Boro was against his former employers in a 2-1 win over Oxford United, and he ended the season as Stevenage’s top scorer with 16 goals in 47 games, firing the Hertfordshire-based club to the Conference Premier title and into the Football League for the first time in their history. He began the subsequent campaign with Stevenage but then dropped back into the Conference with a loan move to Newport County.

From 2011-2013, Odubade plied his trade in the North East with Gateshead, though he spent the second half of the 2012/13 season on loan at Forest Green Rovers, before signing a permanent deal with Eastleigh in May 2013. His three years at the Silverlake Stadium were punctuated by a loan spell with Woking, but he managed to contribute 12 goals in 91 league games to help the Spitfires claim the Conference South title in his first season at the club, where he lined up alongside his new AFC Totton teammate Michael Green.

After a season with Maidstone United, Odubade returned to Eastbourne Borough in 2017. He scored 13 goals in 57 league games during his second spell with the Sports, before joining Weymouth in December 2018, initially on loan before signing permanently a month later, in time to help them secure the 2018/19 Southern League Premier South title and promotion to the National League South.

Odubade scored 10 goals in 36 appearances in Weymouth’s first season back at Step 2 in 2019/20, before the league campaign was cut short due to the COVID pandemic. The Terras qualified for the promotion play-offs thanks to their points-per-game record and faced Dorking Wanderers in the semi-final. Odubade stepped off the bench in the 83rd minute and scored deep into injury time to give Weymouth a 3-2 victory, before they went on to defeat Dartford on penalties in the final to earn promotion to the National League.

But Odubade was on the move again before he had the chance to play at Step 1, returning to the Southern League Premier Division with Steve Claridge’s Salisbury, for whom he registered 4 league goals in 17 outings. In February of this year, he signed for ex-AFC Totton boss Glenn Howes at Dorchester Town, helping them to stave off the threat of relegation before becoming a free agent in the summer.