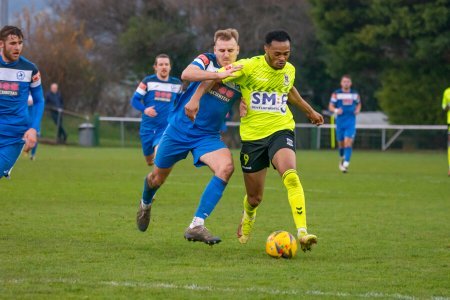 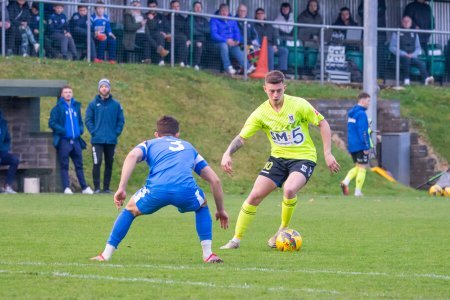 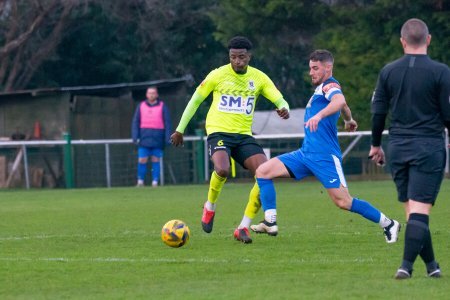 STAGS CRASH OUT OF TROPHY AT HANDS OF LARKS

AFC Totton have been knocked out of the FA Trophy at the third-round stage after defeat to Larkhall Athletic in Bath.

A brilliant strike from Hisham Kasimu was cancelled out as two quickfire goals from attacking duo Daniel Demkiv and Brad Norris helped the Larks progress in front of a raucous crowd at Plain Ham.

Following a tentative start from both sides, understandable given the game’s significance, the home side were the first to stamp their authority with Brad Norris’ effort being scrambled off the line.

Soon after, Amadeusz Skrzyniarz was forced into a low save with his feet by Norris, who should have put Larkhall ahead.

The game was getting quite feisty with plenty of hefty challenges going in. However, completely against the run of play, Totton took the lead through a venomous strike from Hisham KASIMU, silencing the home voices.

Kasimu had an opportunity to double his side’s lead, forcing Larks’ keeper Shaun Semmens to save with his foot.

After the break, interactions got heated as both teams collected cautions and several scuffles ensued.

The Stags had another clear-cut chance with Griffin scraping the ball into Semmens’ body when he was clean through.

Jordan Ragguette was thrown on for the injured Ben Jefford, with an eye to his attacking impetus.

However, out of nothing, Daniel DEMKIV scored an equaliser after a massive defensive mix-up between Callum Baughan and Skrzyniarz, tucking home uninhibited.

Jack Hoey then had an enormous chance to restore Totton’s lead, only to glance his free header wide from six yard after a spectacular Sam Griffin cross.

The Larks took advantage of the miss, lashing the ball off the Stags’ post via a deflection.

From the resulting corner, NORRIS scrambled the ball home, erupting Plain Ham, leaving the away side ruing missed chances.

In the late stages, Ethan Taylor was sent off for a dangerous challenge which all but ended their chances of getting back into the game.

The Larks move into the fourth round of the FA Trophy with a possible tie against a National League side, while AFC Totton return their focus back to their Southern League Division One South campaign.