Have fun, make new friends, develop as a person & a player 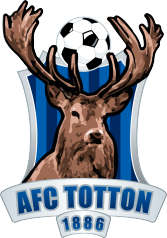 Introduction to the AFC Totton Youth set up

AFC Totton's youth teams provide a pathway from Under-10s football all the way through to the club’s Under-18s, the Pro:Direct Academy Southampton and, potentially, the Stags' first team.

The headquarters for the youth is at the Snows Stadium. Depending upon the age group, training takes place Monday to Friday, with games being played on Sundays, either on the 4G or grass pitches at a number of locations in the area.

The club’s coaches are qualified up to UEFA B standard. All of them are DBS checked and are qualified in the Safeguarding of Children and in administering emergency First Aid.

Here's a list of youth team coaches and officers:

A great introduction to football for your little ones in an established league system.

An introduction to competitive football in a well established league system.

We have two teams in this competitive football much-loved league.

We have two teams in this age group, including our first girl's team.

We have three teams in this group. Progress in competitive football within well-established leagues.

A great introduction to a higher level of competitive football in established leagues.

A step closer to a football pathway at AFC Totton, either through the U18s or Academy.

One of the best levels to showcase skills and competitiveness in youth football. For those wanting to continue playing at the top level of youth football.