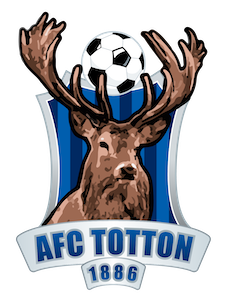 AFC Totton made it two wins from two after another slim victory over a defiant Melksham Town side, with Hisham Kasimu’s second-half goal being the only difference.

On a breezy evening in Wiltshire, Totton started the liveliest of the two sides, with an early opportunity falling to Sam Griffin after a superb long ball from Jordan Ngalo.

The home side came into the game, not making the most of the chances they had made. The Stags thought they had taken the lead when they had the ball in the net through Stephane Zubar, only for the assistant to flag him offside. The teams went in level at half-time.

In the second half, Totton’s relative dominance continued. The away side brought Brett Williams on for Jack Hoey, who had received a tough time in the first half from the Melksham midfield.

The change added even firepower to the Stags’ attack but the breakthrough came from an unlikely combination when an enormous clearance from Ade Olumuyiwa was not dealt with by Connor Johns in the home net.

A second half melee led to a booking for Adam Tomasso after a rash challenge on Albie Hopkins, but a late onslaught of pressure from Town was not enough to deny Totton the victory as they secured maximum points from their first two league games.

The Stags Radio Man of the Match was Sam Griffin - he caused Ibrahim plenty of trouble in an intense first-half battle. On a different day, he may have found himself on the scoresheet.