this Saturday, Oct 30, AFC Totton welcome Dorchester Town to the Snows Stadium, for this mouthwatering 3rd Round Qualifying encounter in the Buildbase FA Trophy.

Get your tickets now from the Ticket Office 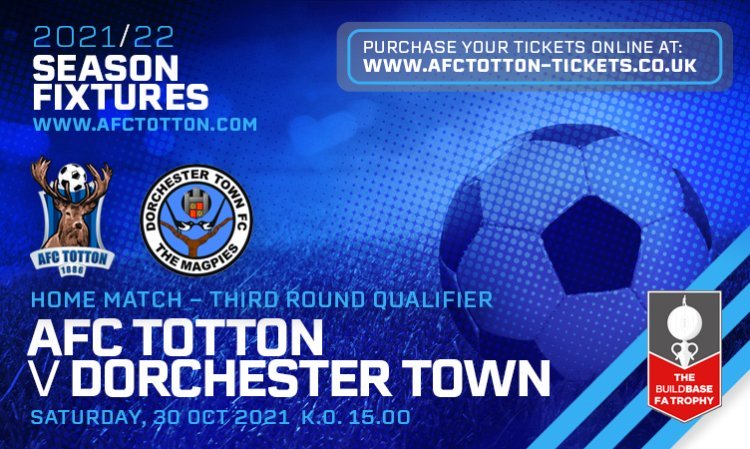 Dorchester Town history. The Magpies were among the first football clubs to be formed in the south of England in the early-1880s, though they can trace their roots back further to the 1871 establishment of The Dorchester Football Club, playing a version of the game more akin to modern rugby in a manner that quickly "attained an enviable reputation for respectability and skill", according to the Dorset County Chronicle.

Despite being founder members of the Dorset League in 1896, the club had to wait 42 years to win it, beating Sherborne 2-0 to claim the 1937/38 title – their only pre-WWII trophy. Since 1950, they have won the Dorset Cup on 12 separate occasions, including back-to-back triumphs in 1968 and 1969, and most recently in the 2011/12 season. They’ve also had a smattering of success in Southern League competitions, celebrating their Centenary by lifting the Southern League South Division for the first time in 1979/80, and enjoying a purple patch in the early 2000s when they won three different trophies.

A 1981 Dorset derby is among the club’s highlights in the FA Cup, when a goal by Paul Thorne against AFC Bournemouth secured a 2nd Round replay at Dean Court, before a then capacity crowd of 8,000. But the Magpies were left broken hearted when the Cherries scored a last-gasp winner, late into stoppage time.

Up front for Dorchester that day was Trevor Senior, who went on to become one of the most prolific strikers in the Football League during two spells with Reading from the mid-1980s, and later became Dorchester’s Assistant Manager. Other famous Magpie alum include two former Tottenham and England players in Martin Chivers and Graham Roberts, the former AFC Bournemouth and West Ham United midfielder Matty Holmes, current Cardiff City striker Kieffer Moore, a member of the Wales squad at the European Championships during the summer, and Ex-Saint Danny Ings, who enjoyed a fruitful spell at The Avenue as an 18-year-old in 2010, while on loan from Bournemouth.

Dorchester Town is a fan-owned football club. In 2015, it was transformed into a Community Benefit Society, which allowed thousands of fans to acquire an equal share in the club and become influential voices in the important, decision-making discussions about how the club should operate.

The 2021/22 season has not been kind to the Magpies. They currently sit in the relegation zone in the Southern League Premier Division South, with 3 wins and 9 defeats from their 12 matches to date – the most recent, a 1-5 loss at mid-table Chesham United. After a parting of the ways with Robbie Herrera earlier this month, first team coaches Brian Churchill and Craig Robinson took over as interim managers. They notched their first win on Wednesday 13th October when an Alfie Stanley hat-trick secured a 3-2 victory at Tiverton Town.

The clash against the Stags will signify Dorchester’s first participation in the Buildbase FA Trophy this season. However, their FA Cup run fell at the first hurdle in early September, with a 1st Round Qualifying defeat at home to Yate Town by a scoreline of 1-3.

The two sides met once before in November 2018 in the same competition, where Dorchester won 3-1.

Get your tickets now from the Ticket Office