For the second time in a fortnight, AFC Totton had the opportunity to test themselves against higher division opposition by taking on Southern League Premier South promotion challengers Gosport Borough in the 3rd Round of the Hampshire FA Senior Cup at Privett Park this evening (Wednesday).

Stags Head Coach Dan Sackman used the occasion to rotate his squad. Goalkeeper Lewis Noice, Ade Olumuyiwa, Ryan Pennery and Shaquille Gwengwe were all back in the team after injuries of varying degrees. Jordan Ragguette started at left-back and Brett Williams made only his second start under the new manager. Wingers Ethan Taylor and Sam Griffin joined Hisham Kasimu on the bench, together with regular full-backs Callum Baughan and Ben Jefford. 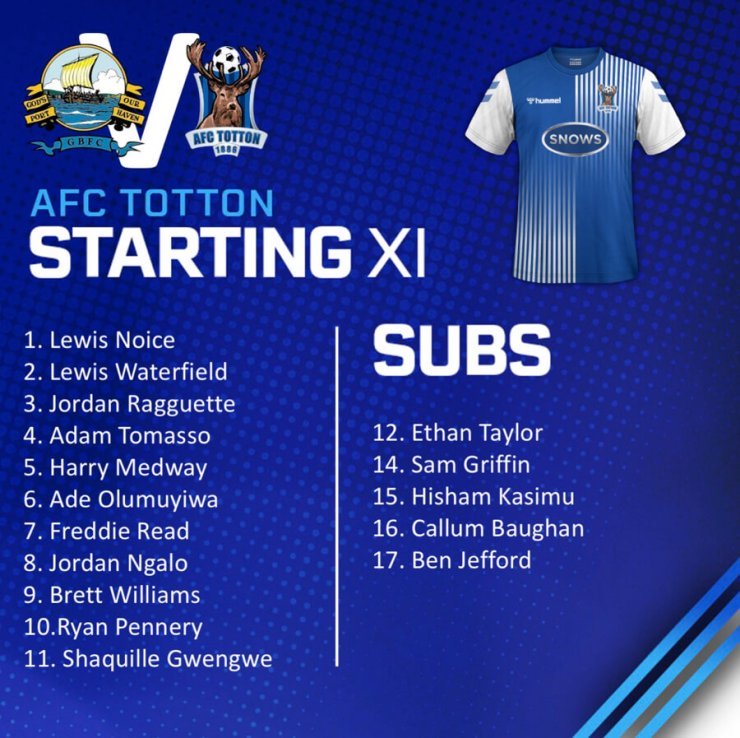 One of Gosport’s obvious strengths is the towering presence of 6’8” centre-back Matt Casey, whose early intervention for the home side prevented Lewis Waterfield’s right-wing cross finding Williams unmarked in the middle.

After a relatively quiet opening to the match, fit-again forward Shaq Gwengwe brought the ball under control in the 9th minute and took on the Borough defender Harvey Rew. As he moved into the penalty area, a couple of stepovers were enough to lure the left-back into a lazy challenge that resulted in a penalty for the Stags. Ryan PENNERY, facing up against his former club, struck his shot low and although Ellis Grant got a hand to it, he couldn’t keep it out.

The goal came at a cost, though, as Gwengwe was forced to limp off the pitch shortly after, having been injured in the winning of the spot-kick. He was replaced by Sam Griffin, while Gosport made a change of their own, taking off captain Mick Carter in favour of Jake Wright. So, with just 10 minutes on the clock, the visitors were 1-0 up with both sides having made a substitution.

Freddie Read looked to extend the Stags' lead with a shot across goal after charging into the penalty area from the right. Then, Brett Williams tried a speculative long-range lob that flew a long way over the top.

Jordan Ragguette brought the ball forward by 40 yards and found Griffin out wide. He squared it to Williams, who knocked it on to Pennery but his shot was blocked. Totton got forward a few more times before Gosport eventually managed to break free and earn themselves a couple of corners at the other end, where the giant Casey was closely marshalled at all times by Ade Olumuyiwa. Totton got the ball clear and Ragguette launched a counter-attack but couldn’t find a teammate at the crucial moment, when Jordan Ngalo was arriving in the middle for the right pass. 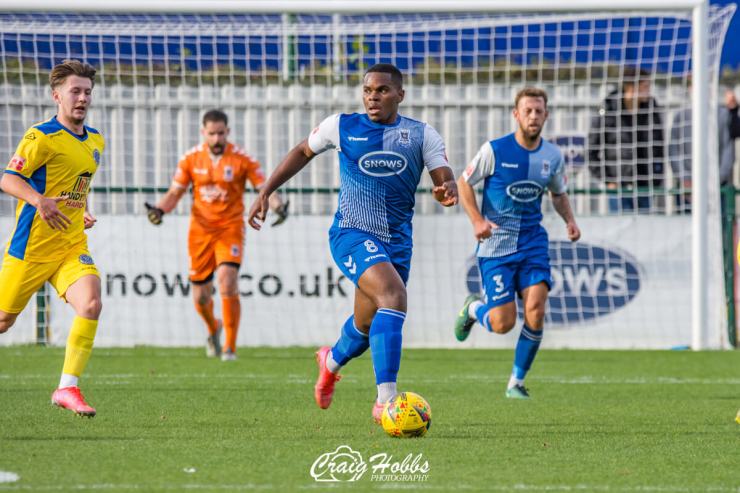 Gosport deservedly equalised from a corner in the 25th minute. Harry Kavanagh put the ball across and the ex-Southampton and Burton Albion striker Matt PATERSON headed home at the far post, despite Noice getting a touch on its way in.

Sam Griffin immediately threatened to put the Stags back in front when he dribbled into the penalty area and went down under a challenge, but the referee wasn’t impressed.

Ragguette began to make a nuisance of himself down the left-hand side but Gosport were able to block his crosses, or crowd him out whenever he tried to run through on his own. Williams battled for high balls but he was on a hiding to nothing against the much larger Casey. And the home side were able to break at pace when the chance arose, making them a dangerous proposition. Elliot Wheeler’s shot from the edge of the area flew wide of Noice’s right-hand post via a deflection. Kavanagh took the set-piece and Lewis met it in the middle but couldn’t hit the target.

Griffin launched a solo run at the home defence and tried a shot with the outside of his right foot, but it was blocked. Then, Read played Griffin down the right wing and he crossed for Williams, but the ball had too much on it for the centre-forward to connect.

A Harry Medway clearance down the centre was well-controlled by Brett Williams, who laid it off to Ragguette on the left but his cross was confidently claimed by Grant. Then, Ragguette received a cross-field pass from his opposite full-back Lewis Waterfield, and drifted infield before firing over the crossbar from 30 yards, shortly before the referee brought a close to an end-to-end first half.

Callum Baughan came on for Adam Tomasso for the second half, as a direct replacement in the defensive midfield position rather than reverting to his usual right-back berth where Waterfield continued.

The Gosport right-back Kavanagh broke up a Totton attack and charged forward down the wing. Medway got across, won the ball and passed back to his goalkeeper but Noice sliced his clearance. His blushes were spared, though, when Kavanagh failed to capitalise.

Neat interplay between Freddie Read and Pennery produced a shooting opportunity for Read, who stung the goalkeeper’s palms with an angled shot. Then, Ragguette drove at the defence down the left-hand side and cut the ball back dangerously, but Borough managed to clear and briefly threatened a counter-attack of their own, before Totton came forward again, Brett Williams floating past a defender and blasting over the bar from close range, when he should have scored. Gosport defender Matt Briggs needed treatment having hurt himself during that passage of play, and he was swiftly replaced by substitute Finley Walsh-Smith.

When play resumed, Olumuyiwa had to be alert to nick the ball off Matt Paterson’s toe to prevent the veteran striker doubling his goal tally for the evening.

Ryan Pennery went down inside the box under a challenge by Walsh-Smith in the 54th minute, but the referee waved play on. Within a minute, Waterfield worked the ball from the right flank to the left where Jordan NGALO jinked in and out of a few midfielders before smashing a long-range shot over Ellis Grant to put Totton back in the lead with a sensational strike.

Gosport made their final change by taking off Matt Paterson and sending on Paul Agbeseyi.

Kavanagh continued to struggle with the pace and directness of Ragguette, who was happy to raid down the wing from his full-back position at every opportunity but end product eluded him and his Totton teammates. A quick switch of play from right to left put Ragguette in possession again. He fed Griffin in the middle, who was taken down on the edge of the area for a Totton free-kick virtually on the 18-yard line. Williams went for a curling shot but his effort was too high.

Grant had to be off his line quickly to beat Pennery to a through-ball from Williams, after excellent control by Griffin on the half-way line to initiate the opportunity. Then, at the other end, Lewis Noice had to use both hands to punch away a Gosport corner. Gosport won a free-kick approximately 35 yards out, from which Rew tried his luck and earned his side a corner via a Totton head. An in-swinging cross was again punched away by Noice and was returned with interest, but a Totton limb diverted the ball wide for another corner, which Noice was able to claim. 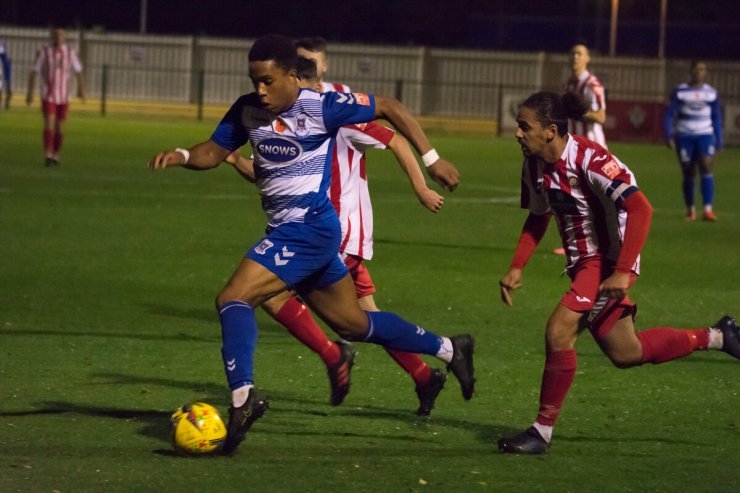 Having withstood the pressure, the Stags were buoyed by the introduction of Ethan Taylor in place of Ryan Pennery, who’d made a successful goalscoring return to the team after a long injury lay-off. Taylor and Sam Griffin immediately swapped wings, restoring Griffin to his favoured left flank and Taylor to the right-hand side.

With 12 minutes remaining, Ragguette attacked down the left and fed the ball into the middle. Walsh-Smith took a lose touch, enabling Williams to steal the ball before the centre-forward was bundled over, the referee once again shaking his head in response to Totton penalty appeals. Then, for the second time in the match, Williams blasted a shot out of the ground, with Taylor frustrated that he didn’t receive a pass in space on the right wing. Ethan Taylor then took on his marker on his way to the edge of the penalty area, before being tripped. But again, the referee turned away Totton’s pleas for a decision.

The dynamic Jordan Ragguette raced the full length of the pitch down the left flank, beat Agbeseyi and got to the left-wing byline. Casey did well, though, to defend Raguette’s fizzing cross at the expense of a corner, which goalkeeper Grant confidently claimed in the air.

An early snapshot taken by Taylor came to nothing and then an angled shot on the turn by Brad Lethbridge flew narrowly above Lewis Noice’s goal. Brett Williams went down heavily, again, after a 50-50 challenge near the touchline, without getting the decision.

Dan Sackman implored his team from the sidelines to maintain concentration and not to allow their opponents any late rewards. Noice did well to pounce on the ball when it was played across his penalty area with Lethbridge lurking ominously. Then, with everyone except Gosport keeper Grant in Totton’s half of the pitch, the Stags were forced back into their defensive third to protect their slender lead. Medway and Olumuyiwa - the two Totton centre-backs - both went down needing treatment as the last few minutes approached. Whether those were genuine injuries or two experienced players slowing the game down and eating up time is not entirely clear.

Williams was clattered again as he tried to shield the ball, the referee insisting the challenge was fair and allowing play to continue. Gosport huffed and puffed but couldn’t blow the Stags’ house down, and the AFC Totton defence held on to claim their third higher division scalp in cup competitions this season. 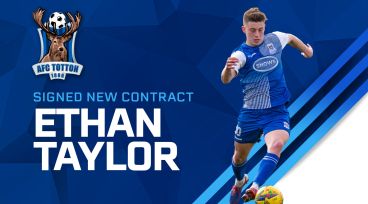 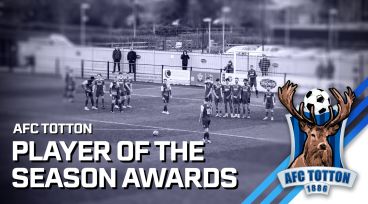 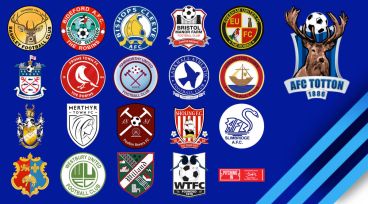 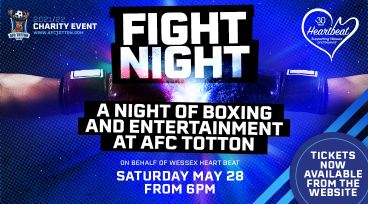