AFC Totton took full advantage of one of their games in-hand over their Southern League Div.1 South rivals by securing all three points against mid-table Willand Rovers at the Stan Robinson Stadium in Exeter last night (Wednesday), and thrust themselves back into contention for promotion with a comfortable 4-1 victory.

Still buoyed by their emphatic win over higher division opponents in the FA Trophy last weekend, the Stags lined up with only one change to the starting XI. Skipper Harry Medway was rested after receiving a knock during the historic 5-0 win over Concord Rangers, so Stephane Zubar partnered Ade Olumuyiwa at the centre of defence and left-back Ben Jefford wore the captain’s armband. Dan Sackman took charge from the dug out for the first time since being confirmed this week as the permanent First Team Manager, having held the position on an interim basis since mid-October. 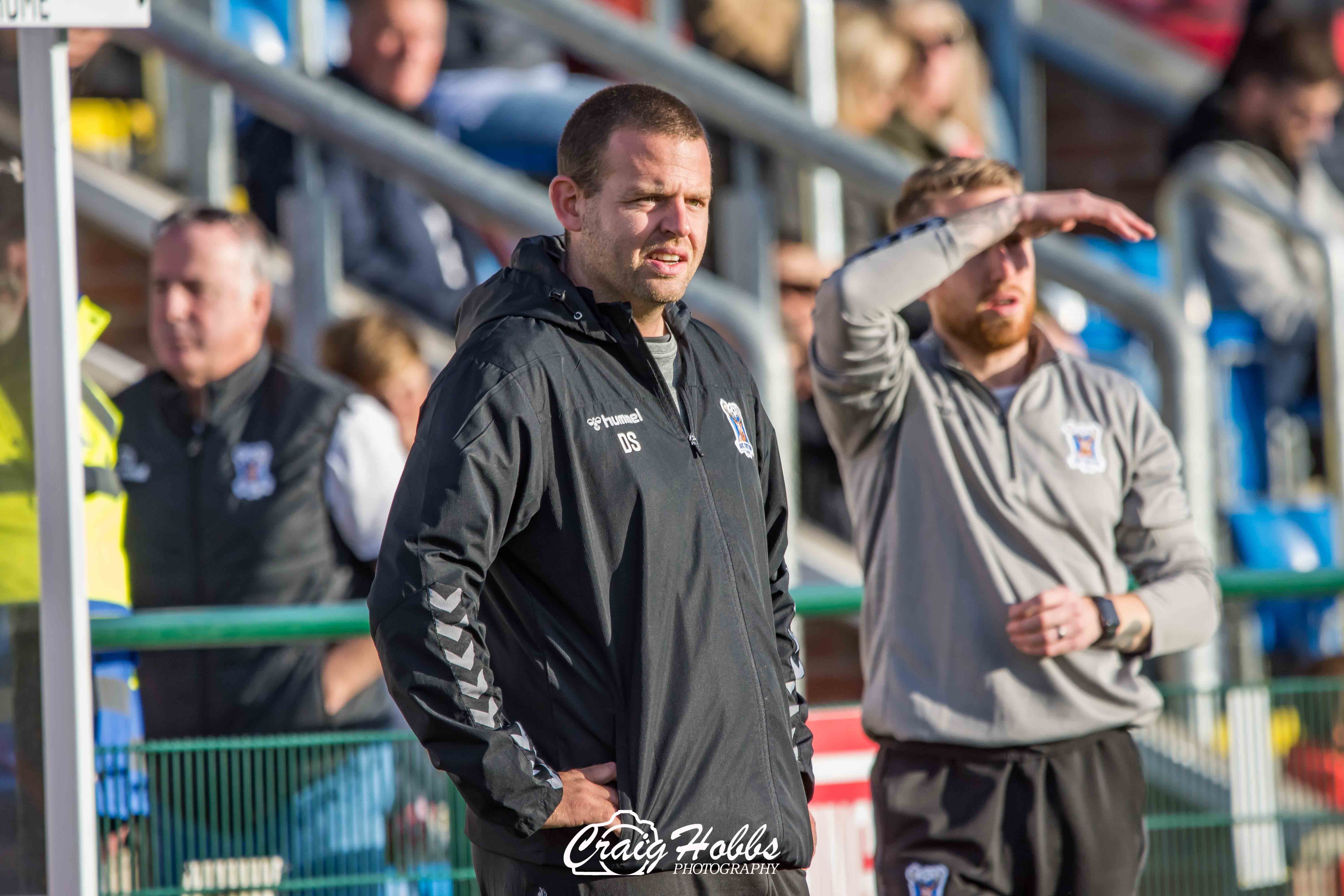 The Devon All-Whites came into this match in 13th-place in the league table, their only win from their last 8 matches coming at the weekend against bottom club Barnstaple Town. And within 40 seconds of the referee’s first whistle, they were a goal behind to the eager Stags. Totton were pushing down the left-hand side and Willand cleared only as far as Adam Tomasso, mid-way inside the Rovers half. He swept the ball forward over the head of a defender and into the inside-left channel where Ethan TAYLOR darted in behind the defence and, from close to the angle of the 6-yard box, struck a first-time left-foot shot high into the net above goalkeeper George Burton’s right shoulder.

The visitors were in a hurry to build an unassailable lead, while their hosts were struggling to deal with the pace of Totton’s attack. Sam Griffin’s low shot was saved by Burton. Then, Griffin fed Taylor on the right, he stumbled his way past Rovers left-back Will Richards and laid the ball off for Jack Hoey to force a corner out of Burton, with just 4 minutes on the clock.

Griffin and Taylor linked up again in the 8th minute, Taylor rushing in from the right flank on his favoured left foot, shrugging off a defender and forcing Burton into evasive action again with another low shot. The resulting left-wing corner was initially cleared to back where it came from, allowing Hoey to strike into the side-netting from a tight angle.

Rovers opted to defend with a high line, with Burton operating as a sweeper-keeper in the ample space behind his back four. Burning his way past them was food and drink for Hisham Kasimu. One of his raids was halted when the ball went out of play on the right flank. Hoey and Callum Baughan exchanged passes and then Baughan launched a high cross that threatened to drop over Burton, the keeper having to back-peddle and push it over his crossbar.

In the 13th minute, Stephane Zubar stepped out of defence and fed Griffin on the left-hand side. He checked infield and retreated a couple of steps as he brought the ball under control and then clipped a diagonal pass over the Willand defence to drop close to the feet of Kasimu, through on goal, but he could only get a faint touch, to Burton’s relief.

Shortly after, the home side won a free-kick on their left, mid-way inside Totton territory but stern defensive work by Tomasso and Hoey meant they had to settle for a corner. From the cross, the ball sat up nicely for a Willand player to attempt an overhead kick that Ben Jefford had to head off the line from next to his left-hand post. Adam Tomasso immediately sent Kasimu away down the right wing, where he was able to leave defenders in his wake on his way to the right-wing byline. As other defenders fell back into their own penalty area and Burton tried to make himself big, Hisham KASIMU set himself and fired a left-foot blaster past the keeper at his near post to put the Stags 2-0 up. 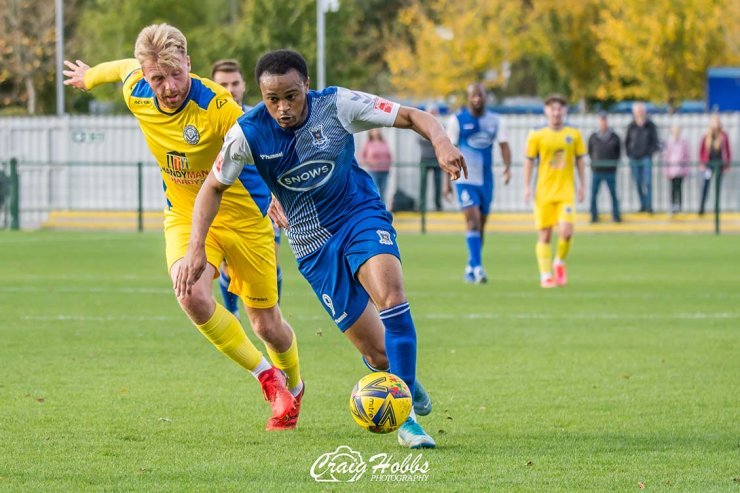 LETHAL WEAPON: Hisham Kasimu's brace puts him on 9 league goals for the season.

The home side couldn’t settle and there were signs of troubles still to come for them when Burton came a long way out of his goal to intercept Tomasso’s punt but was beaten to it by Kasimu, only for a recovering defender to make a crucial block. Then, Burton tangled with one of his own players on the edge of his area when Griffin was the target of an angled pass from the right of midfield. And the keeper was out again shortly after, to tackle Kasimu close to the 18-yard line to prevent the Totton striker latching onto Hoey’s through-ball.

Josh Searle did well to beat Griffin to another angled pass designed to get the Stags’ left winger in behind. Then, Rovers striker Noah Coppin found himself free in the box from a left-wing corner, but he headed over the bar.

Burton continued his foolhardy game of “Chicken” with Kasimu, rushing out again on the half-hour to clear into touch in his left-back’s position. His teammate Louis Jagger Cane, who notched a brace against Barnstaple at the weekend, attacked down the Willand left flank before being dispossessed by Ade Olumuyiwa. But the big defender lost the ball in midfield and Richards shot over from 25 yards.

Ethan Taylor was booked on 38 minutes for a heavy, late sliding tackle on Ryan Guppy, which dislodged the Willand player’s shin pad. The Stags winger almost redeemed himself within a minute, sprinting ahead to latch onto Kasimu’s flick from the centre-circle and opting to shoot early to catch Burton unaware, but the keeper reacted smartly with a low save to his right. And Taylor began to display some frustration, three minutes before half-time, when he fired over from the edge of the area after good work from Griffin and Hoey to create the opening.

Amadeusz Skrzyniarz demonstrated his alertness early in the second half, catching the ball under pressure from a right-wing Willand corner. Rovers began to target Callum Baughan with high diagonals, but the Totton right-back dealt with anything that came his way. Then, Skrzyniarz had to react quickly to stop a low cross-shot sneaking in at his left-hand post.

On 51 minutes, the goal that every single one of the 146 people in the ground knew was going to happen, happened. A Willand clearance from the right of their midfield was returned with interest by Hoey, allowing Kasimu to set off at pace and giving the green light to George Burton to come tearing out of his goal, again. But the Rovers keeper didn’t get there in time, his attempted clearance hitting the Stags striker square in the chest, leaving a 25-yard void between him and the unguarded Rovers net. Desperately retreating defenders couldn’t get back quickly enough as Kasimu closed in on goal, the one exception who did was wrong-footed by a drop of the shoulder as Hisham KASIMU rolled the ball into an empty net before Burton could scamper back into position.

Kasimu didn’t get the chance to complete a hat-trick, though, Dan Sackman opting to take him off in the 54th minute to be replaced by Brett Williams, who was celebrating turning 34 years-old. And the birthday boy got straight into the action, combining with Baughan down the right flank before crossing to the far post where Griffin slipped in behind Searle to head against Burton’s knees from close range. Stephane Zubar came up for the corner which was driven in low from the left-wing quadrant, prompting the former AFC Bournemouth defender to improvise a flick that soared over the crossbar.

Willand managed to mount some sustained pressure mid-way through the second half. A scrum of Totton defenders couldn’t get the ball clear and when it popped up on the Rovers right, Coppin controlled neatly on his chest and struck his shot against the upright. Then, Jefford had to clear off his goal line again before the assistant referee’s flag called a halt to proceedings.

Around the hour mark, Jack Masterton came on for Jordan Ngalo who’d had a quietly effective game in midfield. Then, Ben Jefford was called into action again to prevent Coppin connecting with a left-wing cross from deep by Richards. Totton needed a couple of attempts to get the corner clear, but when they did, Hoey released Jefford down the left. He played the ball infield to Taylor whose sharp turn beat the defender and enabled him to square the ball past goalkeeper Burton to present Hoey with a gilt-edged chance to make it 4-0, only for Ryan Guppy to slide full length in the nick of time to block on the goal line and hack the ball away.

With 20 minutes to go, more midfield tourism from Burton gave Brett Williams a sight of goal, but the ball was whisked off his foot before he could shoot. Then, a clever nutmeg in midfield by Taylor enabled him to put the determined Williams to work chasing a through-ball down the right flank, where he again nipped in before Burton could get there. As the goalkeeper scrambled back, Williams flighted a high one towards the far post, but it had a little too much on it and dropped behind for a goal kick.

The roving Rovers shot-stopper did well to prevent Taylor scoring in the 73rd minute, after the Stags winger raced onto Hoey’s pass and again opted for a first-time low shot, when he might have carried it further towards goal. But Taylor didn’t have to wait too much longer to get on the scoresheet for the second time on the night. Ben Jefford surged through a crowded midfield on his way to the left-wing byline via two quick fire one-twos, first with Masterton and then Williams, and hung a cross to the far post, bypassing the goalkeeper, where Ethan TAYLOR was unopposed to head Totton’s fourth goal. 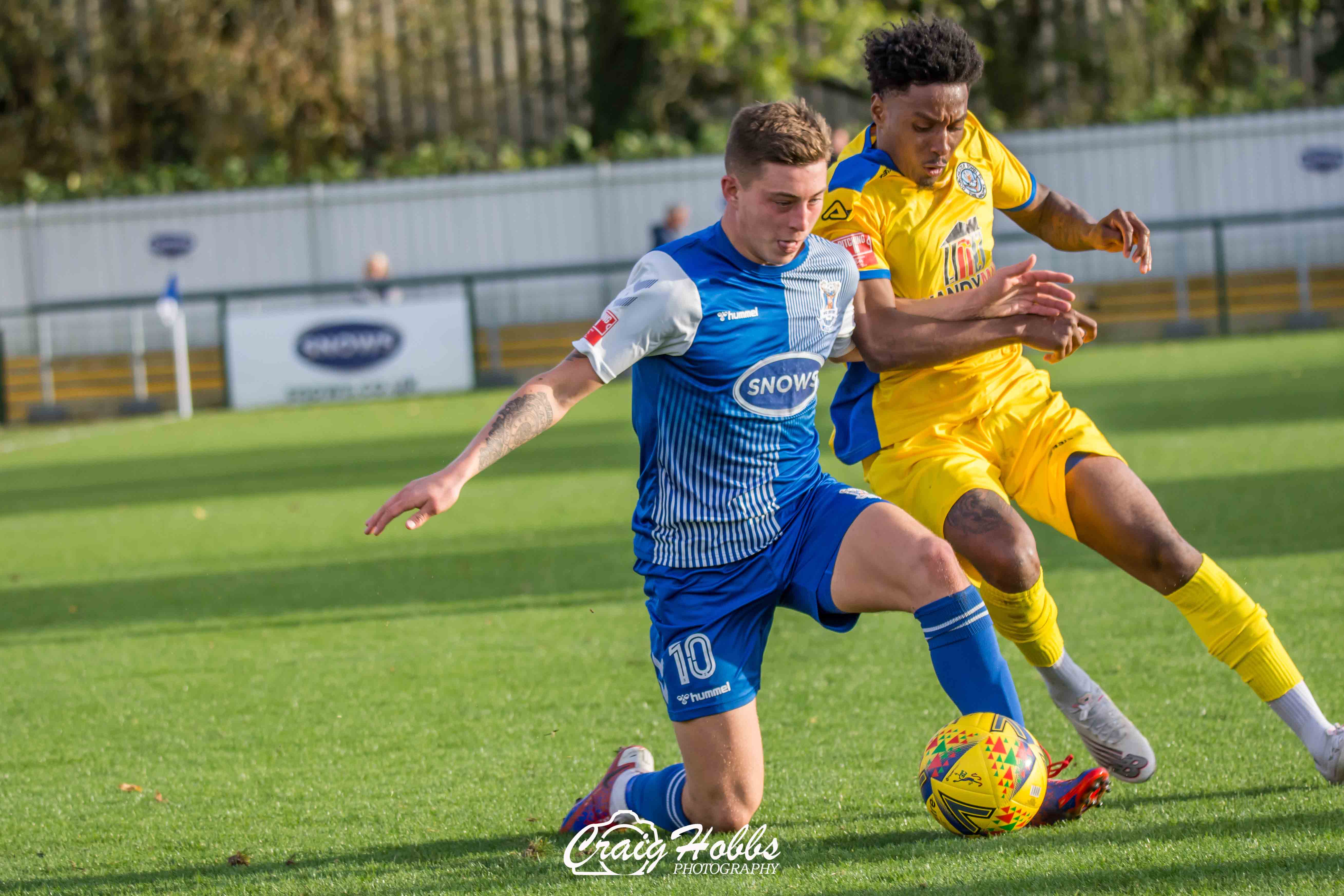 ANYTHING YOU CAN DO: Ethan Taylor also has 9 league goals following his double at Willand Rovers, last night.

Ade Olumuyiwa’s physical presence in the back four had done a lot to keep the home side quiet, but he had to come off during the last 10 minutes due to what looked like a thigh strain. Lewis Waterfield came on to slot in at right-back with Callum Baughan shifting to centre-back. The loss of aerial dominance encouraged the home team to get more crosses in, and Totton began to struggle defensively for the first time in the match. After one cross was unconvincingly cleared from the Totton right, Rovers substitute Benjamin Griffith picked it up in midfield and directed it out to Coppin on the right touchline. His inviting high cross to the edge of the 6-yard box presented Tom BATH with a classic centre-forward’s heading opportunity among a crowd of players and he made no mistake, much to the visible annoyance of Amad Skrzyniarz in the Totton goal.

The home side rallied, forcing the Polish goalkeeper into a save low at his left-hand post after Hoey was beaten in the air. And a late rasper from 25 yards out by Josh Searle clipped the top of the crossbar. But it was too little, too late for the Devon All-Whites, the referee’s final whistle confirming that AFC Totton move into 3rd position in the table with a game in-hand remaining over both Sholing and Frome Town - with potential promotion 6-pointers against both teams coming up between now and New Year’s Day.