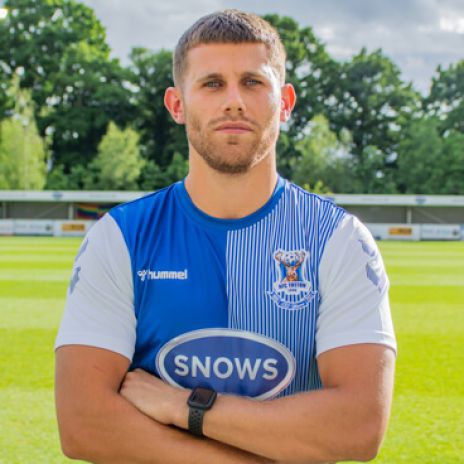 Beginning his football career in the academy of Barnet FC, Kennedy earned a one-year professional deal with the Bees in 2015. After a loan spell with Hayes & Yeading from February 2016, Kennedy joined Basingstoke Town the following summer. He played for the Dragons for three years and became their Club Captain in time for the 2018/19 season.

Strong, aggressive and uncompromising, the central defender, who is equally comfortable operating in central midfield, signed for Gosport Borough in the summer of 2019 and regularly formed a formidable defensive midfield partnership with another new Stags signing Mike Carter, who wore the captain’s armband at Privett Park.

Last season, Charlie led Salisbury FC to safety in the Southern Premier. To date, his team honours are limited to an U18s championship-winning medal with Barnet and a successful Hampshire Senior Cup campaign with Basingstoke in 2017, when they beat AFC Bournemouth’s U23s on penalties after a goalless draw in the Final at St. Mary’s Stadium.

Charlie was high on Totton manager Jimmy Ball’s wanted list this summer and has agreed to take the step down from the Southern Premier League South in order to help the Stags’ stampede for promotion from the Southern League Div.1 South in the forthcoming 2022/23 season.