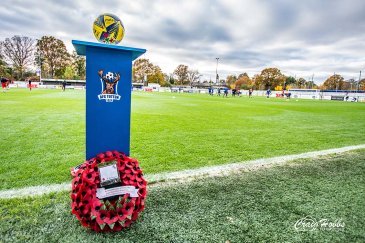 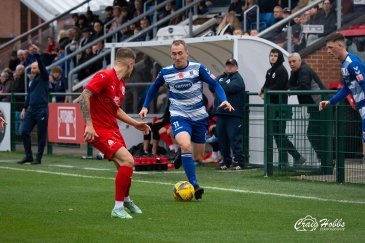 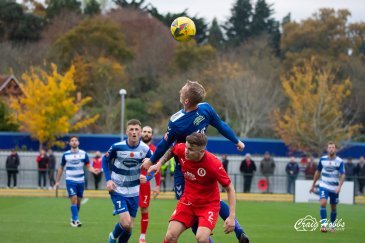 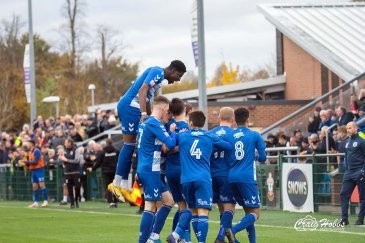 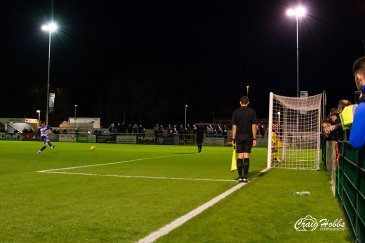 On a special day today at Snows Stadium, the Stags are led onto the field by the Matchday Mascot Harry May and Captain Harry Medway, a gloomy overcast autumn afternoon looked to be a promising one for the boys in the Royal Blue. There was a beautiful moment to celebrate Remembrance Day as the crowd cheered with joy for the fallen soldiers who protected this country.

The Stags attacked from right to left in the first half of this first round of the FA Trophy. A goal line scramble in AFC Totton’s box was quickly countered as a ball over the top allowed Taylor to get to the ball before the keeper, resulting in a red card for Frome keeper Carey in the 11th minute, and the game looked to be a memorable one. The tackle wasn’t malicious but did deny a clear goalscoring opportunity. Midfielder Lenihan was replaced by the manager Danny Greaves who placed himself in goal for the rest of the game.

Frome’s pressure led to a corner in the 20th minute which saw Marcus MAPSTONE fly highest to score to shock the hosts who were 1-0 down to 10 men. AFC Totton then shocked the visitors, as Sam GRIFFIN attacked down the left seconds after the reset, dribbling past two defenders and blasting his shot past Danny Greaves to level the score at 1-1 after 21 minutes.

Jack HOEY’s wonder strike put AFC Totton 2-1 in the 35th minute, curling a fabulous effort with his left foot to the far corner, sending the home support into raptures. Neither side could make the breakthrough despite 5 minutes of first-half stoppage time.

The next big incident came in the 57th minute, Harry Medway receiving a second yellow card, making the game 10 vs 10. Marcus Mapstone received his second yellow for the visitors a short while later, allowing AFC Totton to have the numerical advantage yet again.

Frome scored against the run of play through a gorgeous through ball which was begging to be scored, Jonathan DAVIES equalising. Callum Baughan’s long-range strike was brilliantly tipped onto the post by the visiting manager/keeper, but no side could break the deadlock and the tie went to the dreaded penalty shoot-out. Amadeusz Skrzyniarz saved Davies’ opening penalty, Sam Griffin tucked away coolly to put the hosts 1-0 up, before Rigg scooped his penalty over the bar and Jefford was nerveless from the spot for a 2-0 advantage. Kane Simpson finally put the Robins on the board, but Hisham Kasimu maintained the lead. Rex Mannings scored under immense pressure, but Jack Hoey’s decisive penalty gave Totton the victory, 4-2 on penalties. History made for AFC Totton as they reached the FA Trophy second round for the first time.