Dan Sackman’s AFC Totton made light work of Durley FC from the 14th tier of English football in the 2nd Round of the Southampton Senior Cup last night (Tuesday), racking up a cricket score to record their first win of 2022.

The Stags beat Bashley in the 1st Round of this competition by a single goal in the week before Christmas, while Durley were granted a bye directly into the 2nd Round.

There were several changes from the side that lost at Winchester City in the Southern League Div.1 South on Friday night. Amadeusz Skrzyniarz was handed the No.1 jersey for the first time since the FA Trophy defeat at Larkhall Athletic. Jordan Ragguette started at left-back with Ben Jefford shifting to centre-back and taking the captain’s armband in the absence of Harry Medway. New signing Pascal Kpohomouh came in for his AFC Totton debut. Jack Masterton, whose availability this season has been affected by work commitments, made his first start since November’s trip to Plymouth Parkway. Jack Hoey also returned to the midfield. And striker Hisham Kasimu was given a rest to allow Ethan Taylor to take advantage of the fact that his current suspension for the red card he earned at Larkhall does not apply to this particular competition. Recent teenaged signings Josh Jeffries and Harrison Cable were both included among the substitutes. 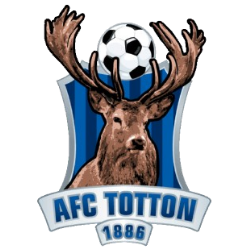 Heavy favourites going into this game, and among the favourites to win the competition outright this season, the Stags started the match as they meant to go on by shifting the ball around quickly and decisively, dominating midfield possession and creating several early chances to take the lead.

Ethan Taylor fired in a dangerous cross from the left, which Jack Young did well to clear while sliding in the middle of his own penalty area. Lewis Waterfield delivered a similarly threatening ball from the right-hand side, which resulted in a short corner, from which Jack Masterton curled a shot narrowly over the crossbar.

Sam Griffin nearly opened the scoring in the 4th minute when he glided past two defenders and fired wide of the left-hand post. Then, Ben Jefford somehow turned the ball over the crossbar from close range after a quick free-kick routine had enabled Jack Hoey to play a square pass across the 6-yard box.

Durley goalkeeper Kane O’Neill made a low save to deny Freddie Read from just outside the area, then Taylor’s cross was directed upward rather than outward and Shaq Gwengwe had a shot blocked. When Taylor escaped the attention of right-back Josh Penny and centred for Sam Griffin, the Stags looked certain to score but O’Neill reacted quickly to make an exceptional save low to his left. Pascal Kpohomouh and Hoey both had chances to open the scoring but the home side finally opened the floodgates in the 12th minute. 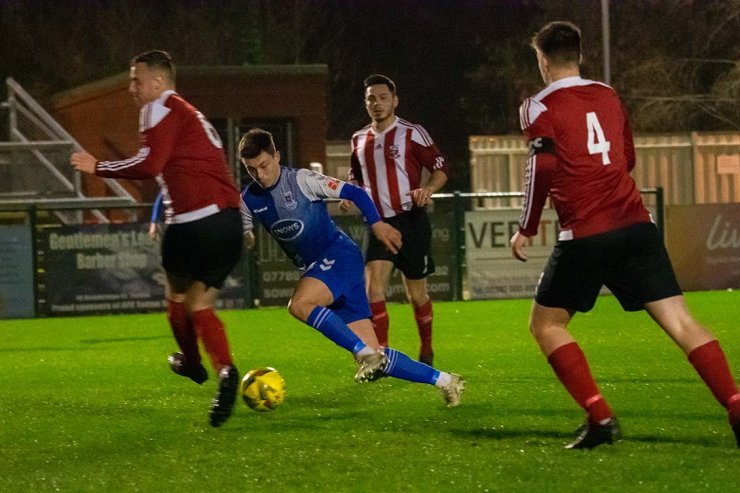 Lewis Waterfield’s low cross into the box from the right wing was not dealt with by the Durley defence. Gwengwe managed to keep the ball alive despite the number of bodies around him, slipping the ball to Ethan TAYLOR who snuck in behind a defender, side-stepped the goalkeeper and shot into the bottom-left corner to send the Stags on their way.

O’Neill made a smart save to prevent Hoey doubling Totton’s lead, but it proved to be only a temporary reprieve. Ethan Taylor’s corner travelled a long way across the penalty area and was headed back across for Jack HOEY to slam the ball home from the edge of the 6-yard box.

With less than 15 minutes on the clock, the Durley players were already beginning to look worn out, chasing shadows in midfield against much fitter players from four tiers higher in the English Football Pyramid.

Exquisite control on the run from Sam Griffin down the right wing was not matched by the finish, even as he managed to race away from the left-back, Mohamed Mokhtar. But the Stags went 3-0 up in the 16th minute when Ethan TAYLOR received possession in the centre, about 25 yards out. He opted more for power than accuracy with his low piledriver, which seemed to deceive and wrong-foot O’Neill, hitting the keeper’s thigh on its way into the bottom-right corner of his net.

From such a comfortable position, Totton took their foot off the gas a little. They continued to dominate the ball and pass it around at leisure, but their finishing became wasteful and the Assistant Referee’s arm on the far touchline was constantly up and down to flag attacking Stags offside, ruling out more than one potential further goal, including Gwengwe’s conversion of a rebound after O’Neill parried another fierce effort from Taylor.

A 26th-minute free-kick near the half-way line gave Durley brief respite. But Dan Fitzgerald launched the ball directly into the arms of Amadeusz Skrzyniarz and the Polish goalkeeper immediately put Gwengwe clean through at the other end with an accurate drop-kick pass. But while the striker managed to beat the last defender, his shot was straight at O’Neill.

Taylor had a goal ruled out for offside, after converting Ragguette’s low cross from the left. Then, Sam Griffin did well to work himself into a shooting position to the right of the penalty spot, but lost his footing at the crucial moment. Shortly after, Skrzyniarz risked being caught with the ball at his feet on the edge of his own penalty area, but the referee’s whistle came to his rescue.

On 41 minutes, Totton went 4-0 up when Shaquille GWENGWE met Griffin’s left-wing cross with a firm downward header, squeezing the ball under O’Neill from around the penalty spot.

Gwengwe had another ruled out for offside. Then, just before half-time, Taylor ducked between two Durley midfielders near the centre-circle and set off on an attacking run down the middle. He laid the ball off to Read, whose low shot from 25 yards was straight at the keeper.

Coming out for the second half, Dan Sackman handed AFC Totton first team debuts to 16-year-old goalkeeper Josh Jeffries, in place of Amadeusz Skrzyniarz, and to 17-year-old forward Harrison Cable, with Sam Griffin making way for him.

Cable settled in quickly and looked lively when linking up with Hoey and Gwengwe down the left flank. A one-two with Hoey enabled him to move infield and shoot for the near post area, sending the ball narrowly wide. Then, while Totton were in danger of overplaying in their attempts to break down the massed ranks of Durley defenders, Kpohomouh and Read were queuing up to take long-range pot shots at O’Neill’s goal. 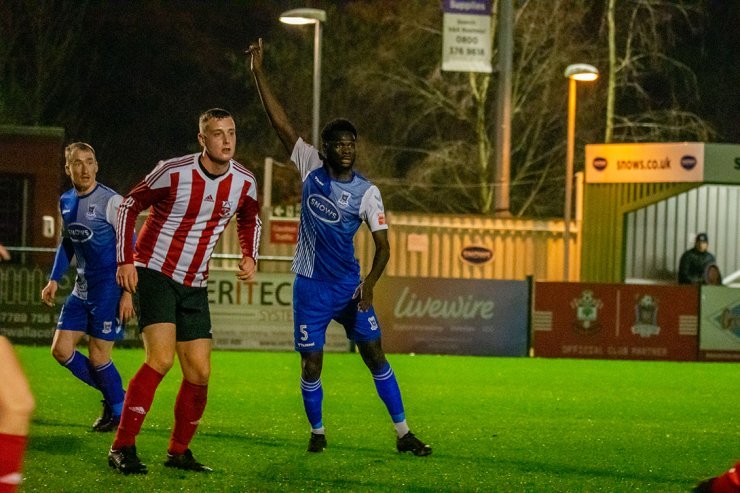 NEW SIGNING: Pascal Kpohomouh made his AFC Totton debut against Durley in the Southampton Senior Cup 2nd Round.

It was Ethan TAYLOR who began the goalscoring in the second half, receiving Read’s pass just outside the area on 52 minutes, shifting it onto his favoured left foot as he burst past two defenders and firing into the bottom-right corner.

Jack Hoey carried the ball forward for Totton down the middle of the pitch, before laying it off to Gwengwe on the right-hand side. His cross was met on the volley by Harrison Cable, but he couldn’t get a clean connection and sent the ball wide. But shortly after, Lewis Waterfield got forward from right-back to combine with Hoey and Taylor on the right wing, picking out Freddie READ with his cross - the diminutive midfielder’s shot took a deflection that lifted the ball into the roof of O’Neill’s net.

There was a debut goal on 59 minutes. A forward pass from Read found Harrison CABLE on the left side of the D. He quickly turned and danced around two defenders to create space for a low, angled shot across O’Neill and into the bottom-right corner to make it 7-0 to the Stags, who were enjoying themselves with impressive short, sharp passing moves.

Totton upped the tempo in the 66th minute. Pascal Kpohomouh played the ball out from the back and Read took up the running in midfield, working the ball across the centre and out to the right-hand side via Gwengwe and Ethan TAYLOR, who shaped his body to bend an immaculate left-footed curler beyond the reach of the keeper and into the far corner.

Cable and Ragguette led a charge down the left flank, with the latter having his cross deflected wide for a corner. It was taken short and Waterfield delivered to the far post, where Kpohomouh was within a whisker of registering a goal on his AFC Totton debut.

Freddie READ added his second goal of the night and the Stags’ ninth in the 69th minute, when Taylor cut the ball back from the left-wing byline to leave him with a routine finish. 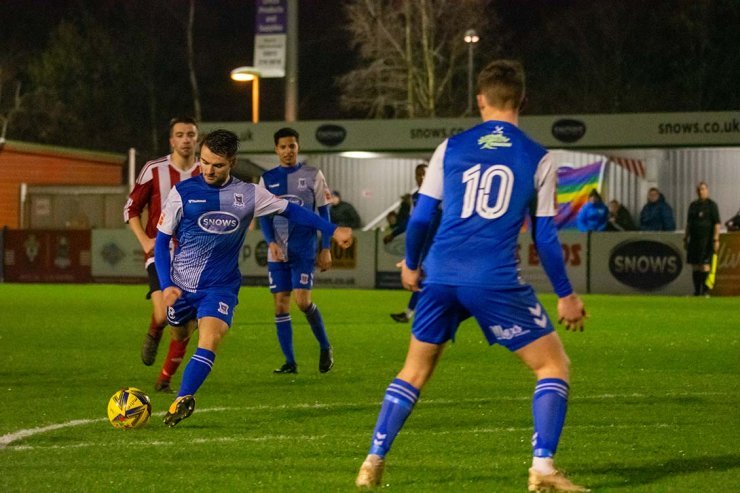 WEIGHING IN: Freddie Read got his name on the scoresheet twice in the 13-0 drubbing of Durley.

There was a nice moment for Durley goalkeeper Kane O’Neill a few minutes later, when he earned the applause of the 267-strong Snows Stadium crowd with an impressive save to deny Ethan Taylor from a well-struck shot from 20 yards.

But Totton moved onto double-figures in the 75th minute. Read slipped the ball into the inside-right channel to put Taylor in on goal. He couldn’t get his shot away quickly enough and it bounced up off O’Neill, who was stranded on the ground. Taylor improvised by heading the ball to the right foot of Shaquille GWENGWE who finished high into the net under pressure from a defender.

Two minutes later, Gwengwe returned the compliment by burrowing down on O’Neill’s goal, prompting the keeper to lunge forward and poke the ball out from under the Stags striker. Ethan TAYLOR was following up and poked the ball home to register his fifth goal of the night.

Jordan RAGGUETTE made it 12-0 with arguably the best goal of the evening on 80 minutes, picking the ball up in the inside-left channel and slaloming his way through three Durley defenders before thrashing the ball past O’Neill with a powerful angled shot into the centre of the goal.

And one minute later, Gwengwe completed the rout, and his own hat-trick, when he linked up with Taylor to move the ball from the centre to the right-hand side, creating space for Shaquille GWENGWE to take a touch and arrow his shot across the goalkeeper and just inside the far post to make it 13-0 to AFC Totton.

There was a late red card for Durley substitute Ryan Povey for an unnecessary foul from behind on Pascal Kpohomouh, as he made a routine back-pass to Josh Jeffries. And Kane O’Neill finished the match with a smart save to prevent Harrison Cable helping himself to another goal from Gwengwe’s right-wing cross.