In their first away game since early-February, AFC Totton stumbled to a surprise defeat in North Devon last night (Tuesday) against a Bideford AFC team that came into the match in 16th place in the Southern League Div.1 South table. The Robins took an early lead thanks to a wonder strike from forward Matthew Buchan and held on for the duration to move themselves out of the relegation dogfight and put a huge dent in the Stags’ ambitions of making the promotion play-offs.

In his second game since taking the reins at the Snows Stadium, new Manager Jimmy Ball made just one change from the side that beat the same opponents 4-2 on Saturday, in the first leg of their unusual league double-header, with Nathan Hurst coming into midfield to replace the injured Adam Tomasso, as the new boss kept faith with his 3-4-3 formation.

Ball’s opposite number, Shaun Joyce, was able to welcome back several players who missed the weekend’s trip to the South Coast, including striker Louis Jagger-Cane who recently joined Bideford from Willand Rovers. Craig Duff, who scored both of the Robins’ goals at the Snows Stadium, dropped to the bench for this encounter at the 6,000-capacity Sports Ground. 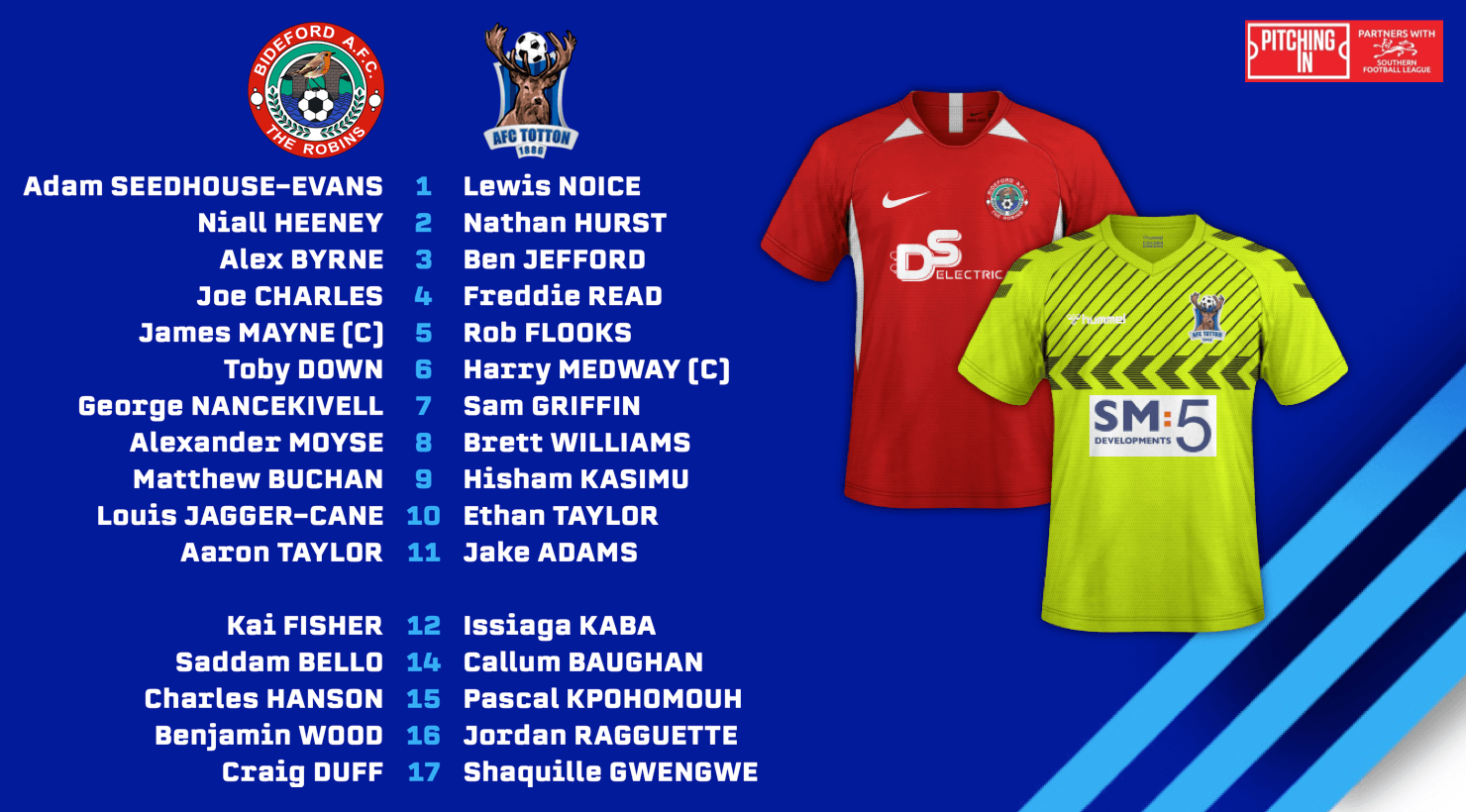 Although there is no obvious colour-clash between Bideford’s all-red home kit and Totton’s usual blue-and-white ensemble, the Stags took to the pitch in their changed kit of fluo yellow shirts, black shorts and yellow socks, which was certainly known to be the preference of Jimmy Ball’s predecessor Dan Sackman when playing evening matches under floodlights. This meant, however, that both Lewis Noice’s yellow and orange goalkeeper jerseys did present a colour-clash, requiring him to wear the blue home shirt normally modelled by his outfield teammates.

On a patchy, bumpy pitch, AFC Totton got off to a profoundly awful start as a high ball out of the Bideford defence was brought under control by the centre-forward, about 25 yards out on their left-hand side. Advancing inward from the flank with Rob Flooks seemingly blocking his path, Matthew BUCHAN struck an audacious effort from the angle that left Lewis Noice with no chance, crashing against the underside of the crossbar and bouncing on the goal-line before spinning into the visitors’ net to give the Robins an unexpected early lead.

Despite the early set-back, their was no instant response from the travelling party, Totton instead showing some difficulty in getting to grips with both the pitch and their opponents. A defensive muddle between Ben Jefford and Harry Medway required an agricultural clearance into touch, and then, when Ethan Taylor and Hisham Kasimu began to make inroads towards the Robins box at the other end, a simple punt upfield by a Bideford defender required Medway to shepherd the ball back to Noice with Buchan snapping at his heels.

The Stags then began to settle and enjoyed the lion’s share of possession for a period, in which they also raised the tempo of the game. Jake Adams, playing on the left-hand side, sought Ethan Taylor with a high cross to the far post. The delivery was a little too hard, so Taylor had to retrieve the ball and make use of the support offered by Sam Griffin who was quickly closed down and the ball cleared. Then, Adams popped up on the opposite flank, showing impressive skills with the ball at his feet and threatening to create until Joe Charles - Sam Griffin’s ball in the face from point blank range victim on Saturday - stuck out a toe to evade the danger for the home side.

While Totton struggled to find a foothold in the game, Bideford were happy to drop back, fill up space and pose their threat on the counter-attack. Buchan almost got through in the inside-left channel when Griffin found himself the last man for AFC Totton, but the winger stuck to his task well and made himself enough of an obstacle in Buchan’s path to enable Noice to snatch the ball up before the Bideford frontman could get a clear sight of goal. When Bideford did get bodies forward, Nathan Hurst made an important defensive clearance to repel a Charles cross from their right-hand side.

As the half-hour mark approached, Totton’s rhythm was still nowhere to be seen; too many fouls and offside calls disrupted the flow of the game and when the Stags had the opportunity to cross the ball, the resolute Robins backline dominated the skies. A wickedly whipped Jake Adams delivery from a free-kick in the right-wing corner found Griffin at the left-hand post but Niall Heeney diverted the ball wide before the Totton winger could apply the finish. 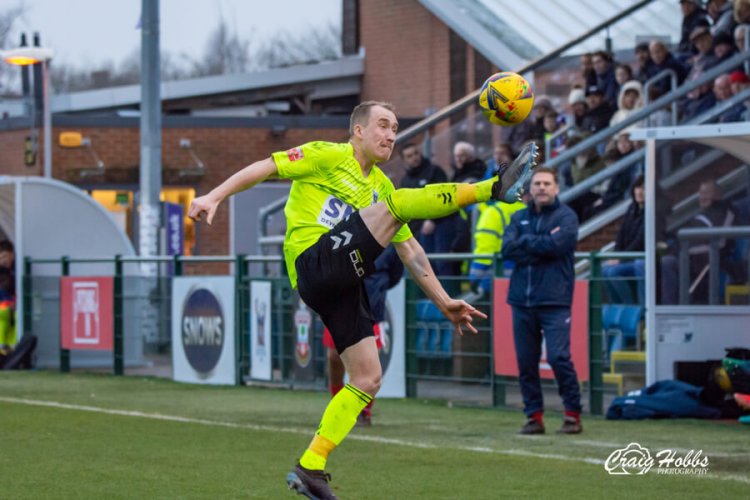 HARD-WORKING WINGER: Sam Griffin put a shift in for the Stags, attacking and tracking back during a difficult night at Bideford.

Griffin then found himself chasing back towards his own goal as Bideford launched a counter-attack, but a strong tackle by Ben Jefford near half-way soon put a stop to that. Shorty after, a game of head tennis broke out in midfield, until the ball fell to Buchan who was able to advance down the Bideford left-wing. He moved infield and tried to replicate his exceptional opener, this time sending the ball high and wide. Then, Brett Williams got the ball down in a central position 25 yards out and went for goal, his shot deflecting off a Bideford defender and out for a corner on the right, which Totton were unable to capitalise upon.

In the 38th minute, Bideford really should have gone 2-0 up, when Buchan beat the Stags’ offside trap to advance on the Totton goal with a teammate available for a simple tap-in if he’d played the ball across the 6-yard box. But he overhit the pass and the ball sailed harmlessly away toward the far touchline, as the visitors took a collective sigh of relief.

Totton’s best chance of the half came three minutes later, when Hurst’s defence-splitting pass found Ethan Taylor in an advanced position. He got his head up well to spot Hisham Kasimu bursting into the 6-yard box, Niall Heeney intervening for the home side to prevent the Stags striker finishing the chance.

Just before half-time, the troublesome Buchan burst into the Totton box again, after holding off the challenge of Medway, Jefford coming to the rescue by nicking the ball away.

Neither side made any changes during the break and, as with the first half - and despite the Stags’ fluo yellow shirts - Bideford came out the brighter of the two sides, with Charles receiving the ball in acres of space on the right wing only for a bad first touch to let him down and let Totton off the hook. Then, five minutes into the second period, Lewis Noice made himself big to prevent a Bideford cross being converted from close range, the rebound being fired back in by a Robins forward only for Harry Medway to clear off the goal-line.

Jimmy Ball decided to bring on Jordan Ragguette in place of Sam Griffin in the 55th minute, in an attempt to spark his team’s performance into life. But it was Bideford who put the ball in the net two minutes later, when Hurst was dispossessed deep inside his own half and Buchan latched onto the through-ball to slip it under Noice and into the goal, an offside flag ruling his effort out.

Ben Jefford got involved in some off-the-ball tussling close to the hour mark, as he tried to grab the ball and get play moving again after it had gone out of play, only to be hindered by the more laid back approach of his opponent. By the 66h minute, Totton still hadn’t troubled Adam Seedhouse-Evans in the Bideford goal. Several long, direct passes intended for Kasimu or Ragguette failed to trouble the well-drilled defence, and when an in-swinging cross found Ethan Taylor inside the box, he couldn’t get above the ball, steering his header over the top.

With 20 minutes to go, right-back Callum Baughan came on for Jefford, as Jimmy Ball reverted to a 4-3-3 system with Ragguette shifting to left-back and Flooks and Medway slotting in as conventional centre-backs. That left Hurst in the holding midfield role with Taylor and Read either side of him, and Williams leading the line with Kasimu on the right and Jake Adams on the left. 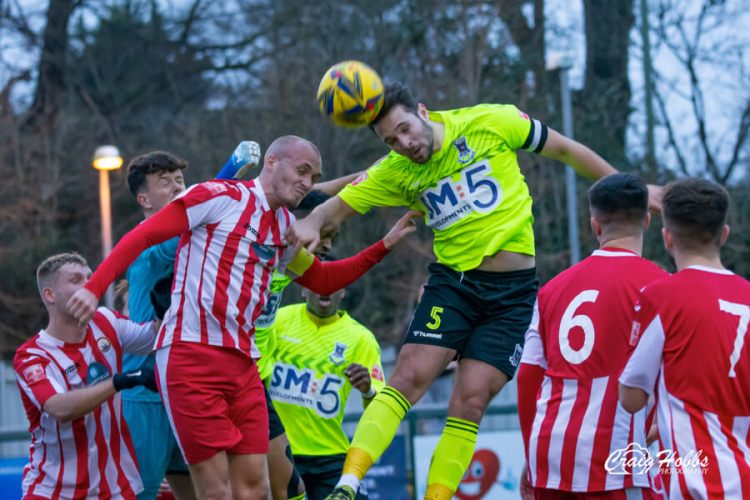 Harry Medway had a golden opportunity to level the scores when he got on the end of Freddie Read’s in-swinging corner from the left-hand side. The Stags skipper leapt early in the centre of goal to give himself a free header, but the ball was just a little too high and flew over the crossbar from the top of his forehead.

Ball’s last throw of the dice was to send on striker Shaquille Gwengwe, who stepped off the bench to score Totton’s fourth goal on Saturday, in the hope he could do something similar with Nathan Hurst being withdrawn to make way, 11 minutes from the end. But just a minute later Bideford substitute Charles Hanson, on for Matthew Buchan, was clean through on goal after Totton coughed up possession too high up the pitch. Lewis Noice kept his cool, though, and kept his side in the game by smothering the shot to enable Ethan Taylor to take up the loose ball before Bideford could take advantage of the rebound.

Brett Williams shot wide from Callum Baughan’s deep cross from the right-hand side. Shaquille Gwengwe then had his name taken for going in on the goalkeeper too robustly for the Referee’s liking, to add to the yellow card he picked up for taking his shirt off during his goal celebration on Saturday. With some potentially crucial matches coming up that will make or break AFC Totton’s season, an unnecessary suspension to one of the most lethal goalscorers in the squad would be considerably less than helpful.

Despite four minutes of stoppage time, the Stags couldn’t find a way through, Bideford holding on for a well-deserved win which could have been bigger had they taken their chances.

To add insult to injury, Plymouth Parkway leapt three more points ahead of Totton in the Southern League Div.1 South table with an 89th-minute winner the only goal of the game at home to Larkhall Athletic.

Meanwhile, in the Quarter-Final of the Southampton Senior Cup, Winchester City coasted to an 11-0 victory over Millbrook at Test Park, Olly Balmer helping himself to five goals to set-up a potential Semi-Final against Totton, as long as the Stags beat Hamble Club next Tuesday night.

And, in the Hampshire Senior Cup Final, Totton’s Semi-Final conquerors Eastleigh were beaten by Farnborough on penalties at their own Silverlake Stadium, after fighting back from 0-2 down to draw 2-2 in the regulation 90 minutes. Two missed spot-kicks from a young Eastleigh squad meant Farnborough triumphed 4-1 in the shoot-out to lift the trophy for the eighth time in the club’s history.