NEXT UP! BASINGSTOKE TOWN COME TO THE SNOWS STADIUM 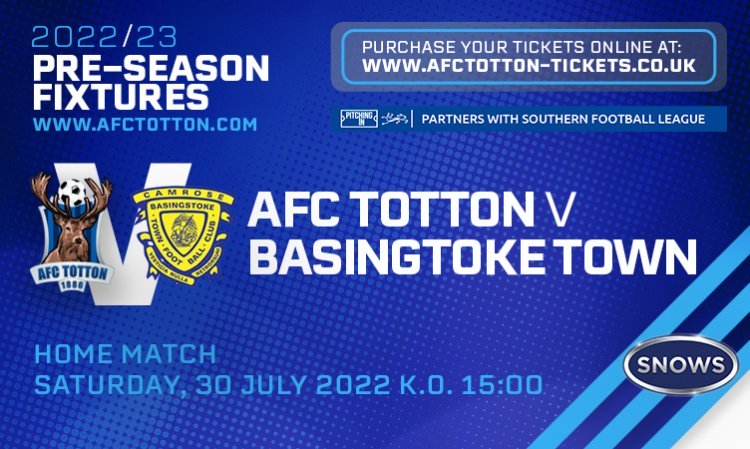 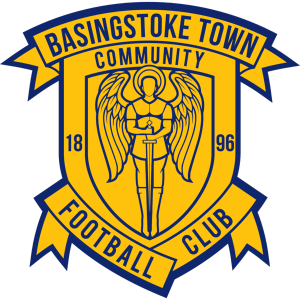 Manager Dan Brownlie guided Basingstoke to a creditable 5th-place finish in the Isthmian League South Central Division last season, qualifying them for the Promotion Play-Offs. But their ambitions were thwarted in the Semi-Final against the league’s runner-up Chertsey Town, who ran out comfortable 4-1 winners despite having their goalkeeper sent off mid-way through the second half.

The Stoke - who have recently refreshed the design of their club badge - also suffered heartbreak in the Final of the North Hampshire Senior Cup, losing 0-1 to Alresford Town of the Wessex League Premier Division in May. The two clubs have since entered into a loan partnership, following Basingstoke’s mid-season signing of talented Portuguese forward Marcio Neves who impressed for Alresford against AFC Totton in the Hampshire Senior Cup last September.

Basingstoke will begin their Emirates FA Cup campaign with an away journey to either Lymington Town or Portland United from the Wessex League Premier Division in the Preliminary Round. In the Isuzu FA Trophy, meanwhile, they will host last season’s Southern League Div.1 South runners-up Cirencester Town in the 1st Qualifying Round. The winners of that tie will be at home to either Highworth Town or Paulton Rovers in the 2nd Qualifying Round. Their league campaign will kick-off on Saturday 13 August with a home match against Bedfont Sports.

If captain and last season’s Players’ Player of the Year Simon Dunn looks tired in the Stoke midfield, it may be because he spent the recent Father’s Day weekend climbing 24 mountains in 24 hours to raise money and awareness to tackle the UK’s fatherless pandemic, contributing to a total raised fund that exceeded £50,000.

The club will be buoyed by the return of fan favourite Sam Argent. The forward, who began his career in the Southampton Academy as a full-back, has moved back to the Winklebury Sports Complex this summer after a spell away with Hartley Wintney and Gosport Borough. Ashleigh Artwell is another recent returnee, having left Basingstoke in 2018 for Wealdstone in the Conference South before stints at Beaconsfield, Marlow and Hayes & Yeading. And experienced forward James Clark, who was a long-time transfer target of manager Brownlie, has also joined after helping Bracknell Town to the Isthmian League South Central Division title last season.

Stefan Brown will be a familiar name to Stags fans. The striker set a new record for the quickest hat-trick in an FA Cup match when he stepped off the bench to bang a 15-minute treble past nine-man Bradford Park Avenue in an 8-1 thrashing in the 1st Round Proper in November 2011. He originally moved to Basingstoke in 2012, returning to the Snows Stadium for a short loan the following season before stints with Hungerford Town, Maidenhead United, Wealdstone, Oxford City and Leatherhead, returning to Basingstoke in July 2021. 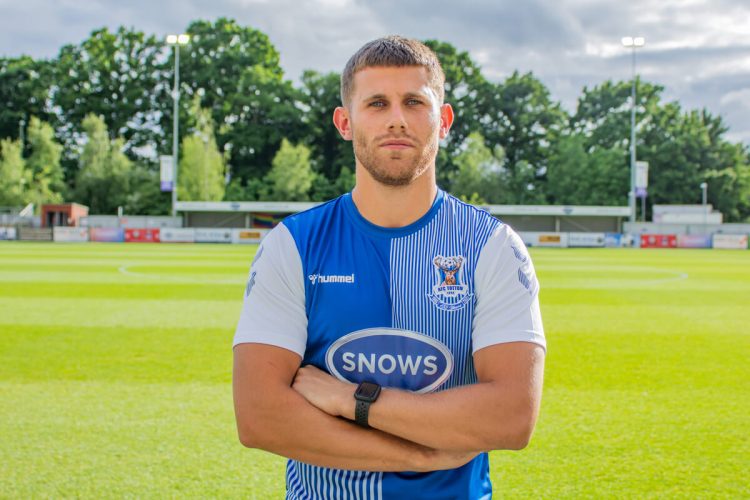 Of the current AFC Totton squad, defenders Ben Jefford and Charlie Kennedy (pictured) are both former Basingstoke Town players. Kennedy was at the Winklebury Stadium for three years and captained the Stoke throughout the 2018/19 season.

Basingstoke's other pre-season matches have garnered home wins over Wembley FC (2-0), Fleet Town (3-2) and Whitchurch (5-1). They then lost 0-1 to Sam Griffin's newly-promoted Hamworthy United, before the reigning Isthmian League South Central Champions Bracknell Town made the short trip from Berkshire to take the spoils 3-1. The Stoke got back to winning ways with a 5-2 thumping of Fareham Town at Cams Alders, and followed that with a 2-2 draw at the Memorial Ground in Surrey, against Step 5 club Farnham Town.