UP NEXT! FA Trophy Second Round Qualifier 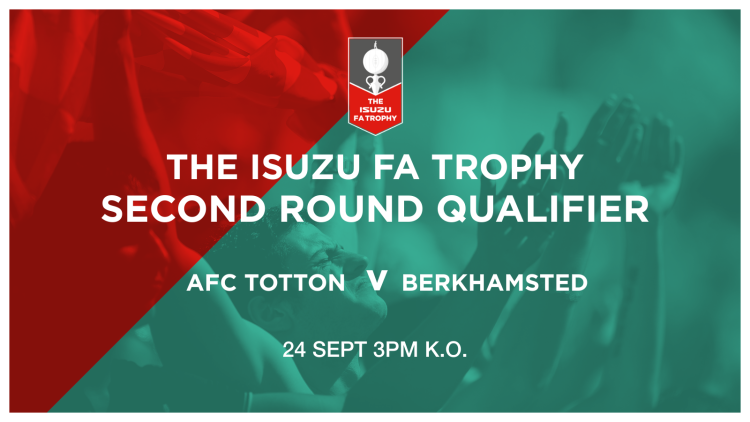 The Stags are back at the Snows this Saturday and face Southern League Div One Central side Berkhamsted who currently sit 4th in the league.

Tickets are on sale now from the ticket office: Here https://afctotton.ticketco.events/uk/en

Hertfordshire-based Berkhamsted might not be one of the teams that springs readily to mind when considering who are the up-and-coming clubs in non-league football in the current era, but The Comrades have done enough recently to warrant taking them seriously when they come to the Snows Stadium for the Isuzu FA Trophy 2nd Round Qualifying match on Saturday.

Competing in the Southern League Div.1 Central, on the same level of the English Football Pyramid as AFC Totton, the club that was formed as recently as 2009 finished runners-up to runaway leaders Bedford Town last season. They were 8 points ahead of 3rd placed AFC Dunstable, but Berkhamsted came unstuck in the Promotion Play-Off Semi-Final. Trailing to a 58th minute goal by North Leigh’s Levi Steele, The Comrades equalised two minutes into stoppage time through Ben Walster, only to then concede an Andrew Gunn goal during extra-time to lose the tie 1-2, despite their home advantage.

Undeterred by that disappointment, Berkhamsted have begun the 2022/23 season in promising form, with three wins from their opening four matches. Progress in the cups, coupled with recent match postponements, have them sitting within striking distance of top spot with a game in-hand over current leaders, Ware.

Berkhamsted began their campaign with a 1-0 home win over Biggleswade, courtesy of Tommy Smith’s 3rd minute goal on Saturday 13 August. They followed that with a comprehensive 4-0 win at Didcot Town on the subsequent Tuesday night, with Lynton Goss registering a late brace. They suffered their first defeat of the season at FC Romania on Saturday 27 August but responded with another 4-0 win on the August Bank Holiday Monday, at home to Aylesbury United, to leave them sitting pretty among the early-season pacesetters.

Meanwhile, Berkhamsted eliminated divisional rivals Ware by a single goal in the Emirates FA Cup Preliminary Round, before overcoming Witham Town from the Isthmian League North Division with a 2-1 victory in 1st Round Qualifying. An emphatic 5-0 home win over Exmouth Town – the Southern League Div.1 South newcomers who are currently tucked behind Sholing at the top of the table on goal difference – got their Isuzu FA Trophy campaign off to an impressive start.

On Saturday, they met Concord Rangers of the National League South – the team that Totton beat 5-0 in the FA Trophy last season – in the FA Cup 2nd Qualifying Round, and took the higher-division team’s scalp with a 2-0 home win to see themselves safely into the draw for 3rd Round Qualifying.

On Tuesday night, The Comrades defeated Southern League Premier Division Central team Kings Langley 4-2 in the 1st Round of the Hertfordshire Senior Cup. Berkhamsted have not won the competition since their formation in 2009 but the Berkhamsted Town club that preceded them won it in 1952/53 and again in 2002/03. Berkhamsted were top of the Southern League Div.1 East after 28 games in 2019/20, before the COVID-19 pandemic caused the early abandonment of the season.

According to our records, AFC Totton and Berkhamsted have not played each other before – certainly not in the modern era.