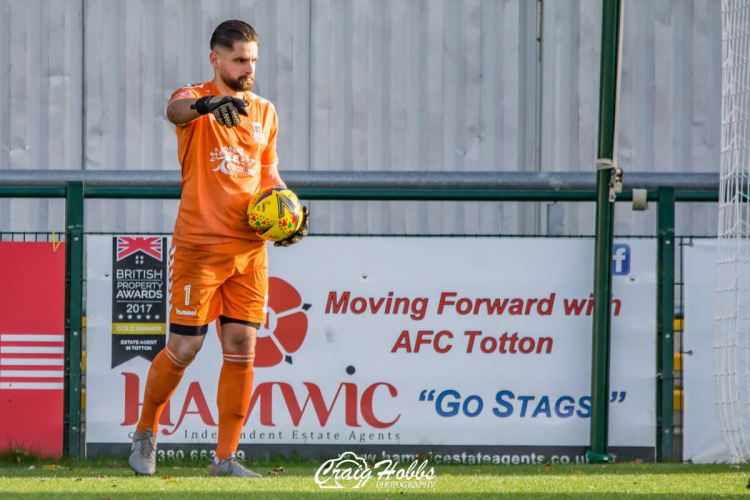 The former Poland U20 international played in Polish League 1 for Chrobry Glogow, before going on to represent Zagłębie Lubin, MKS Kluczbork and Limanovia Limanowa.

After moving to England, he signed for Romsey Town in the Wessex League Division One, before impressing the AFC Totton coaching staff during a training session trial at Southampton’s Staplewood complex – despite having not fully recovered, at the time, from a broken hand!

Loan spells with Blackfield & Langley and at the Lymington Sports Ground last season, coupled with two injury lay-offs for Lewis Noice, has forced Aman to lead something of a nomadic existence recently.

But, already a popular member of the squad, he made his mark on the 2021/22 campaign with some excellent performances during the club’s historic run in the FA Trophy, which included a clean sheet against Dorchester Town, a match-winning save in the penalty shoot-out to overcome Frome Town and a shut-out in the 5-0 mauling of National League South outfit Concord Rangers in the 2nd Round proper, making a massive contribution to what for many of us were three of the highlights of the season.

The 28-year-old made 16 appearances in all competitions for AFC Totton last season, keeping 6 clean sheets and ending up on the winning side on 9 occasions.

Everyone at AFC Totton wishes Aman success with Lymo – and we look forward to seeing him again when the two sides meet during the 2022/23 campaign.