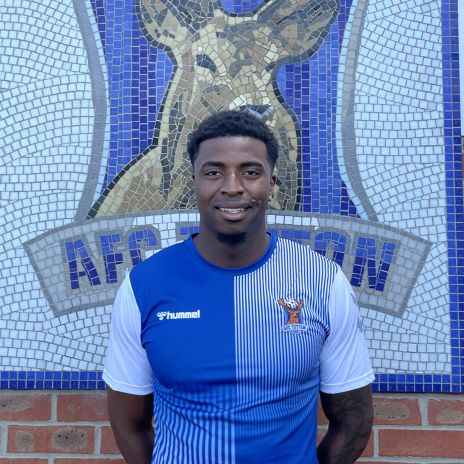 Adeoye Olumuyiwa was born in Lagos, Nigeria in 1997. His family moved to London when he was 6-years-old. As a teenager, he enrolled on a 2-year BTEC Diploma in Sports Studies while playing youth team football for Romford Town, and he went on to represent both Enfield 1863 and Brentwood Town at Under-18 level.

In 2016, Ade was invited to a week-long trial with Aston Villa's U-21s, led by coaches Gordan Cowans (a member of Villa's 1982 European Cup-winning team and a former England international) and Kevin MacDonald (the ex-Liverpool and Leicester City midfielder). During his trial, Ade played with and competed alongside players such as Jack Grealish, Lewis Kinsella, Jacob Ramsey and Keinan Davis. He was told that he was good enough to make it as a professional footballer but needed more time to develop, so he switched his focus to his academic studies and decided to make the move to the South Coast to begin a 4-year Degree course in Sports Studies at the Solent University in Southampton.

He played for Team Solent, the football club of Solent University, for three years while also playing for Blackfield & Langley in the Southern League Div.1 South & West. In his first season with the Watersiders, Ade helped them lift the Southampton Senior Cup in the 2016/17 season and, in his second year, he was voted Fans' Player of the Year as the team went all the way to claiming the 2017/18 Southern League Div.1 South & West title.

In the summers of 2017 and 2018, Ade took up an opportunity to coach youth football in the United States, while playing professionally for FC New Orleans in the NPSL (National Premier Soccer League). Of his time in the US, Ade says: "The football was competitive but you could travel up to 7 hours by coach just to play another team in the same state, so it was hard work!"

Back in the UK, Ade was scouted by AFC Bournemouth and Havant & Waterlooville, and invited to train with Eastleigh for a short while. But he opted to sign for Conference South club Weymouth, where he came into contact with future Stags alumni Jack Hoey, Jordan Ngalo, Brett Williams and Stephane Zubar, under the then-manager Mark Molesley (who has since taken the hot seat at Aldershot Town). Ade made 8 appearances during a successful season for the Terras, in which they won promotion to the National League via the Play-Offs.

But a serious knee injury kept him out for the entirety of the following season and, after being released by Weymouth, Ade decided to link-up with his former Blackfield & Langley manager Glenn Howes at AFC Totton for the 2021/22 season, where he has established himself as an important member of the first team squad, despite Glenn's departure to Dorchester Town.

Still only 24-years-old, Ade is a powerful centre-back who has won honours wherever he’s been, which is a testament to his winning mentality. He has already attracted attention from clubs higher up the football pyramid, including several EFL clubs, and has ambitions to play at a higher level, beginning with guiding the Stags into the Conference South.

In addition to playing for the AFC Totton first team, Ade is the Co-Manager of the Pro:Direct Academy Southampton, which is based at the Snows Stadium, coaching and educating a cohort of 16-18-year-olds on a course similar to those he studied himself, while also preparing to apply for the UEFA B Coaching Licence.