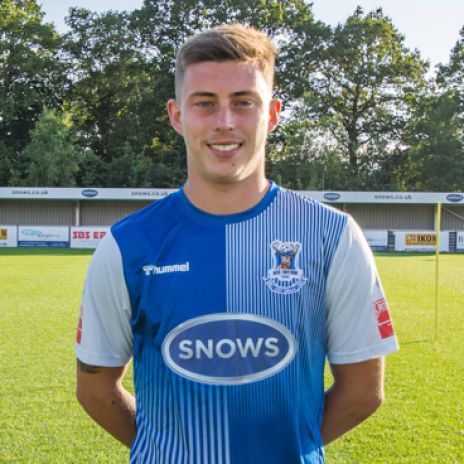 Equally effective through the middle or on the wing, the son of prolific marksman James Taylor is building his own enviable reputation as a cultured young player who is capable of extraordinary goals.

The 21-year-old playmaker ended the 2021/22 season in style by producing a Man of the Match performance in the Southampton Senior Cup Final at St. Mary’s Stadium in May, as the Stags ran out 3-0 winners against Wessex League Division One outfit Folland Sports to lift the trophy for the first time in 40 years.

That capped off a fine campaign for the former Southampton Academy, Sholing and Team Solent player, who made 41 starts for the Stags in all competitions, contributing 23 goals to finish as the team’s second-highest goalscorer. He also donned the gloves as emergency goalkeeper when regular No.1 Lewis Noice suffered a broken collarbone against Winchester City in the Southampton Senior Cup Semi-Final.

Voted both Player’s Player of the Year and Supporters’ Player of the Year, Ethan’s decision to sign a new deal that will keep him at the Snows Stadium for the foreseeable future was a massive relief to fans, who feared that he might be tempted away by clubs higher up the football pyramid.