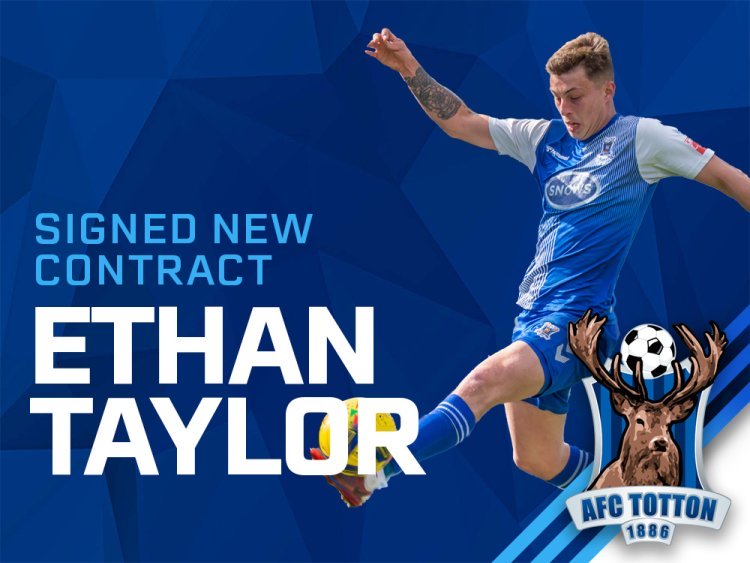 AFC Totton’s newly-crowned Players’ Player and Supporters’ Player of the Season Ethan Taylor has ended speculation about his immediate future by putting pen-to-paper on a new contract that will keep him at the Snows Stadium.

The 21-year-old playmaker ended the 2021/22 season in style by producing a Man of the Match performance in the Southampton Senior Cup Final at St. Mary’s Stadium a fortnight ago, as the Stags ran out 3-0 winners against Wessex League Division One outfit Folland Sports to lift the trophy for the first time in 40 years.

That capped off a fine campaign for the former Southampton Academy, Sholing and Team Solent player, who made 41 starts for the Stags in all competitions, contributing 23 goals to finish as the team’s second highest goalscorer behind striker Hisham Kasimu, for whom Taylor also assisted many times. 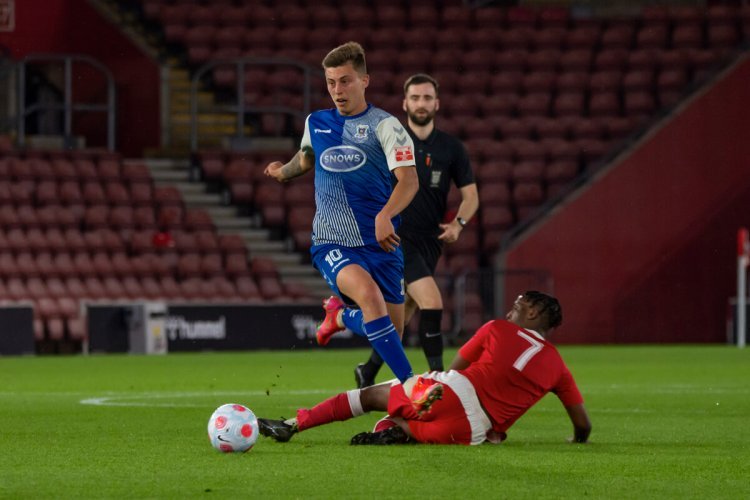 Ethan Taylor rides a tackle during the SDFA Saturday Senior Cup Final against Folland Sports at St. Mary's Stadium a fortnight ago.

News of Ethan Taylor’s decision to remain at the Snows Stadium will be a huge relief to fans, who had feared that clubs higher up the football pyramid might tempt him away. Interviewed in AFC Totton’s Official Matchday Programme for the home Southern League Division One South encounter with Sholing in April, Taylor identified his father James – a former Stags player and fans’ favourite in his own right – as the biggest influence on his football career, also citing the team spirit among his AFC Totton teammates as the best thing about the club.

Manager Jimmy Ball, who took over the reins in March, is delighted to get Taylor’s contract signed, sealed and delivered in plenty of time for the new season:

“Developing good young players and helping them to improve will be an important part of this club’s DNA going forward. Ethan is a big talent and if he continues to work hard and continues to get on the ball and express himself in the manner he has done, then he’ll have a bright future in the game,” said the Stags boss.

“He had an excellent season by all accounts, and I’ve certainly been impressed with him since I arrived here. It’s pleasing to get this deal done and to know that Ethan will be here to play an important part for us next season, as we aim to realise our ambitions of winning the title and gaining promotion.” 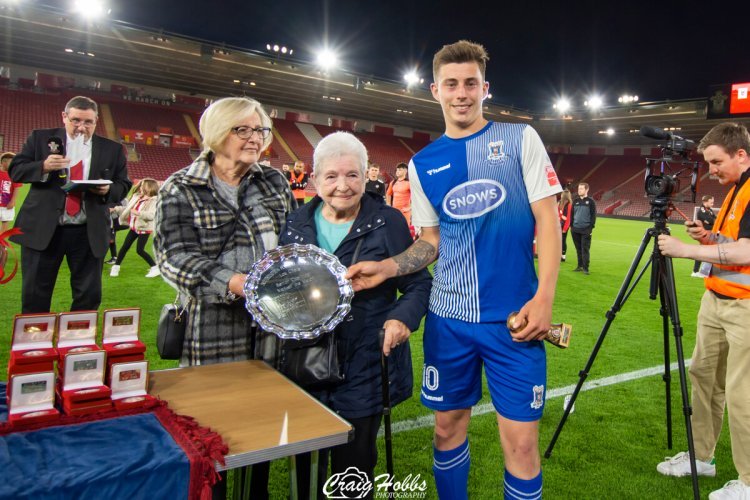 AFC Totton's Ethan Taylor is presented with the Man of the Match shield after the Southampton Senior Cup Final at St. Mary's Stadium.