Next Up FA Trophy Action against Frome Town - Preview 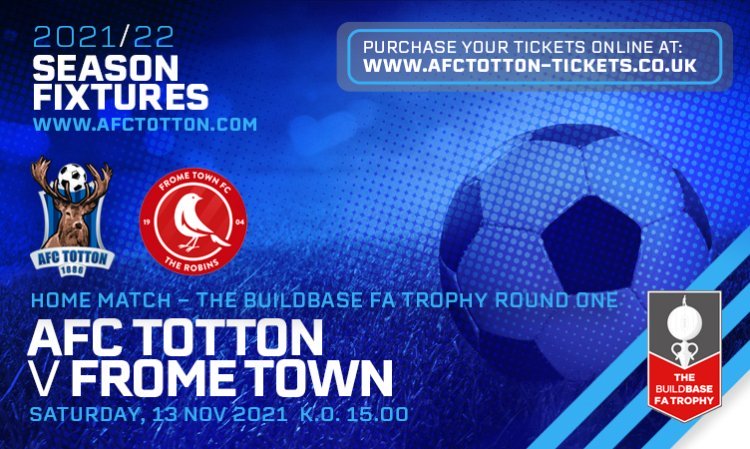 FROME TOWN – Their Season So Far

If AFC Totton and Frome Town had both failed to progress beyond their respective FA Trophy 3rd Qualifying Round matches against higher league opposition, these two sides would still have met in the Southern League Div.1 South this Saturday. But, thanks to our home win over Dorchester and Frome’s impressive 3-2 victory against Poole, we will meet in the 1st Round proper of the knock-out cup competition for semi-professional football clubs.

Frome’s progress on various fronts has perhaps lulled Totton fans into believing we were the form team in our division. But while the Stags were perched at the top of the table, the Robins from Somerset were lurking among the play-off places, nursing an unbeaten record with a few matches in-hand.

Elimination from both the FA Cup and the Southern League Challenge Cup in the space of just four days in early October provided Frome with the chance to catch up on league fixtures, and they now come to the Snows Stadium looking to extend a run of 7 consecutive wins in all competitions.

Having both played 11 league matches, Totton are the more prolific marksmen but Frome are no slouches in front of goal, as Barnstaple found to their cost in early November when they suffered a 9-2 shellacking at Badgers Hill, which saw the Robins hop over the Stags to take top spot in the table.

Jonathan Davies is a former AFC Totton favourite who made 161 appearances for the club, scoring 37 goals between 2010 and 2013. He’s been in fine form for the Robins this season, notching 9 goals from midfield. Striker Kane Simpson, meanwhile, has helped himself to 10 goals in their last 8 matches.

Since the 2009/10 season, these two clubs have met 15 times. In 13 league encounters honours are even, with both sides winning 5 each and drawing the other 3. But Frome won both of our cup ties, albeit one of them was a penalty shoot-out victory in the abandoned 2020/21 season.

Since joining Frome, Jonathan Davies has made a habit out of scoring goals against his old team. His winner knocked us out of the FA Cup Preliminary Round in 2017/18, and he was at it again in October 2019 when his 62nd minute free-kick secured a 3-2 win for the Robins. In the return match that season, he scored a hat-trick without reply in a convincing 0-3 Totton defeat.