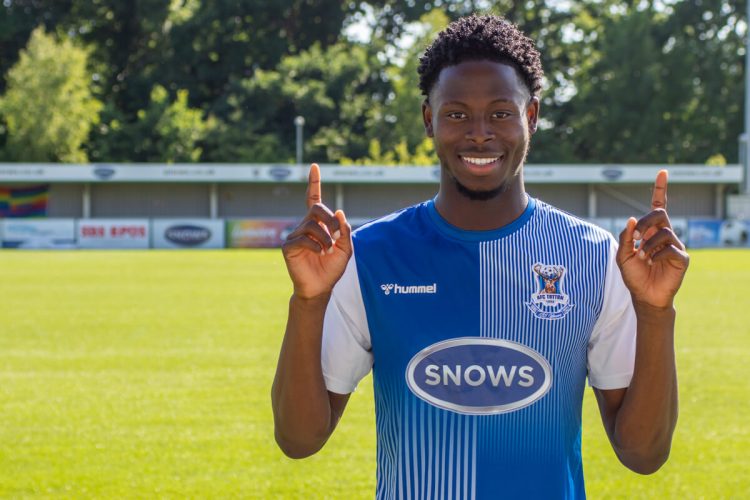 THIS WAY UP: New AFC Totton forward Jireh Oyebamiji has his sights set on success as he reunites with his former Forest Green Rovers boss Jimmy Ball at the Snows Stadium.

Highly-rated teenaged marksman Jireh Oyebamiji has reunited with his former Forest Green Rovers boss by agreeing to sign for AFC Totton, as Jimmy Ball continues to bolster his Stags squad ahead of their bid to win promotion from the Southern League Div.1 South in the upcoming 2022/23 season.

Oyebamiji was born in the Maitama district in the north of the city of Abuja, Nigeria. Having moved to England as a child, he established himself as a regular goalscorer for the U14s team of Sporting Club Thamesmead from the London Borough of Bexley during the 2017/18 season.

He arrived on Jimmy Ball’s radar during a month-long trial at Stoke City, while the Stags boss was working as a coach in the Potters’ academy set-up, before going on to rise from the ranks of the Forest Green U16s to play the majority of last season in the New Lawn club’s academy team. He was in line to make his first team debut for the Green Army in a Papa John’s Trophy tie in October 2021, but injury forced him to withdraw on the eve of the match.

In May, the 18-year-old had a trial with Huddersfield Town, playing 77 minutes for the Terriers’ U19s in a 0-1 defeat to their Walsall counterparts. The EFL Championship club did not offer him a contract, prompting Jimmy Ball to make his move for a player he has admired since their short time together in the Potteries.

“JJ is a player I worked with briefly at Stoke City before taking him to Forest Green. As soon as I got the Rovers job, I was eager to reconnect with him and bring him to the club,” explained Ball, who recently signed a five-year contract with the Stags that will keep him at the Snows Stadium until 2027.

“In my opinion, JJ has tremendous potential and his attitude and personality are top class. He is a dynamic, aggressive centre-forward who scores goals. I believe he will do a great job for the club and go on to achieve great things in the game.” 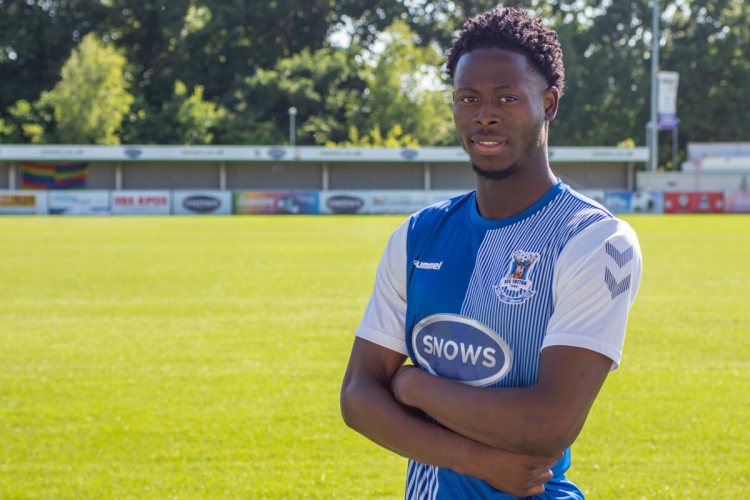 The player, who says he prefers to play on the wing but is also happy playing through the middle, also speaks fondly of working with the Stags manager:

“It is my relationship with Jimmy Ball that has encouraged me to move here. He has a very good understanding of what makes players tick, when to help and encourage you and when to crack the whip to stop you slacking off. Working with him has helped me to use the attributes I have to become a better player, and I’ve enjoyed it. There’s a good bond between us and I’m really looking forward to working with him again, here at Totton.”

Jireh Oyebamiji was a teammate of another recent AFC Totton signing in defender Luke Hallett, when the two of them played together in the Forest Green Academy prior to Hallett’s loan at Gosport Borough last season. Although the teenager, who currently resides in Winchester but plans to move to Southampton, does not have any personal experience of Southern League football, he intends to bring excitement to the Snows Stadium in the upcoming campaign:

“My ambition is to come here and score goals, and make it entertaining for everyone. I’m a direct, attacking player and I believe I can make a positive difference. I’ve set myself an ambitious goals target and I’m going to be working hard to achieve that and to do my best for the team.”