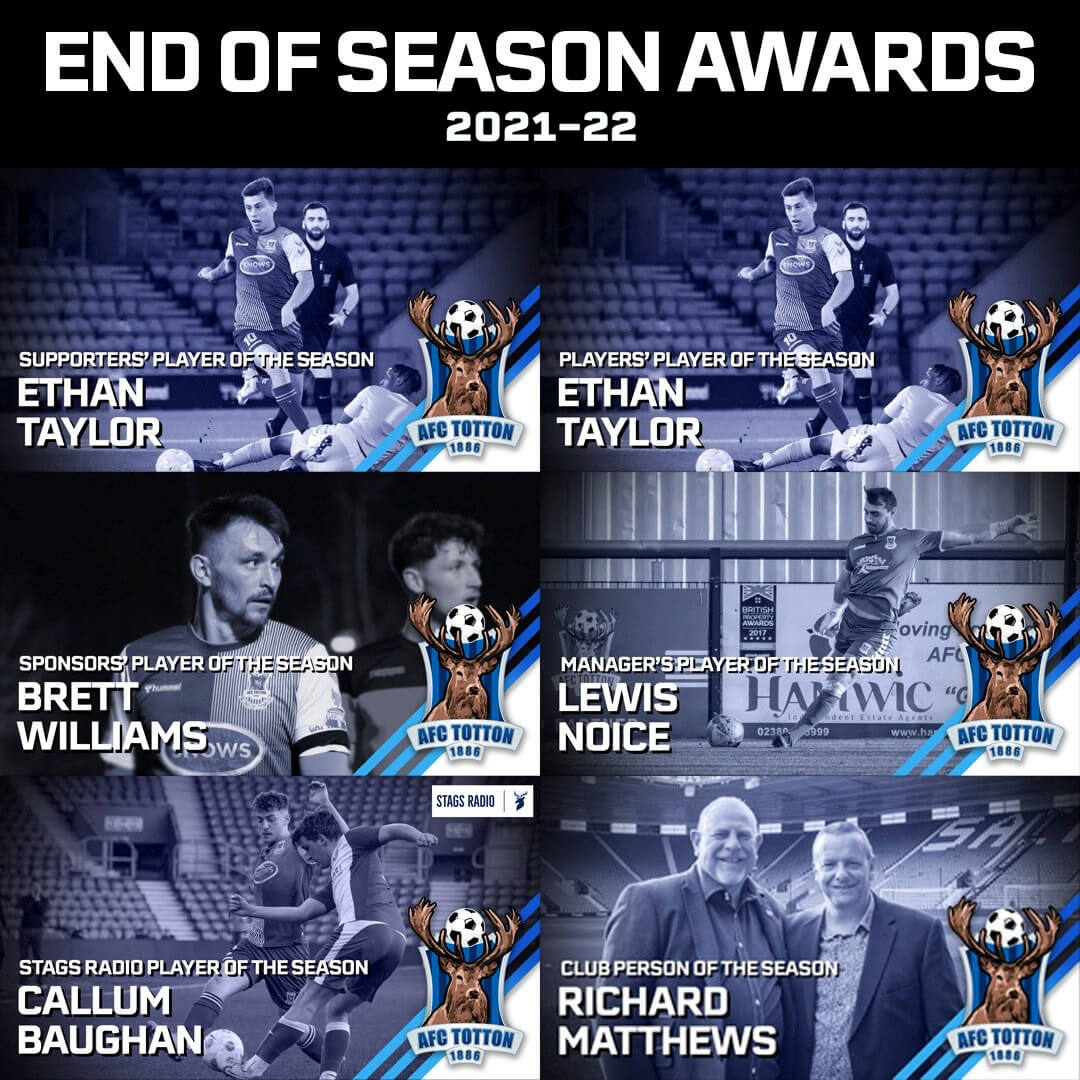 The AFC Totton End of Season Awards Presentation evening brought the curtain down on the 2021/22 season, after a fun evening of charity football courtesy of the Ex-Saints vs the Cockney Rebels on the Snows Stadium pitch on a warm Friday evening.

After the match, players and fans alike joined the AFC Totton First Team and the Club's officials and volunteers for the annual awards, which were compered by the StagsRadio duo of Doug Webber and Benjy Rees, who has recently returned from Poland where he was commentating on an internatioal Ultimate Frisbee tournament.

They began by introducing highlights of the Southampton Saturday Senior Cup Final, expertly shot and edited by Videographer Harrison Read and featuring commentary from Doug Webber and Programme Editor Ben Rochey-Adams. The players watched the highlights for the first time and were in good cheer as each of the three goals that beat Folland Sports at St. Mary's Stadium to claim the trophy played out on the large screen in the Monarch Suite.

Once the award ceremony was underway, the StagsRadio regulars took the opportunity to make the evening's first presentation themselves - and the inaugural winner of the StagsRadio Player of the Season is Callum Baughan. The defender made 40 starts in all competitions, virtually making the right-back spot his own, and contributed two goals. 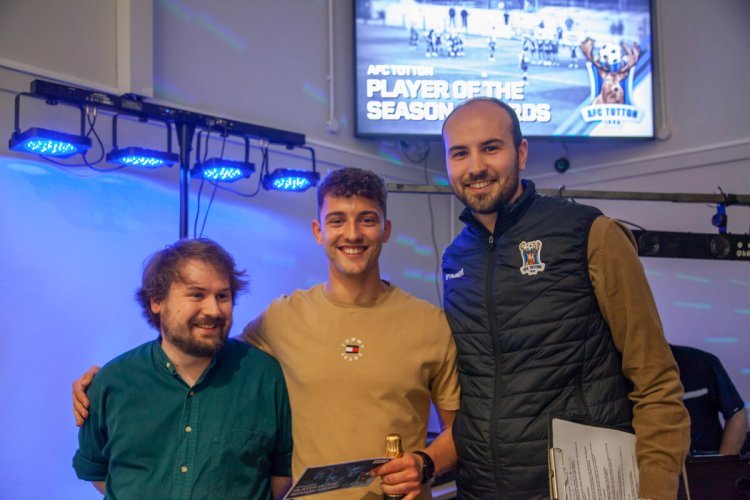 CEO Steve Brookwell then elicited the assistance of Ex-Saint James Beattie to present Club Secretary Richard Matthews with the Board of Directors' Club Person of the Season award. Richard does a sterling job spinning many plates simultaneously on behalf of all the football teams involved with the Club, for which he was deservedly recognised.

Jimmy Ball's first ever AFC Totton Manager's Player of the Season award went to his No.1 Lewis Noice. The goalkeeper may have missed the last few matches due to a broken collar bone but he did enough during the half-dozen games he played under the recently-installed Stags boss to make his mark. Over the course of the whole season, Noicey played 35 matches and kept 16 clean sheets in all competitions, in addition to making some excellent saves along the way.

The responsibility of presenting the AFC Totton Players' Player of the Year - the one they say football players covet most - fell to Club Skipper Harry Medway. Mercurial forward Ethan Taylor won the vote, as just reward for his skill and the consistency of performances throughout his 41 starts and 5 substitute appearances, in which he finished as second top goalscorer on 23 goals. 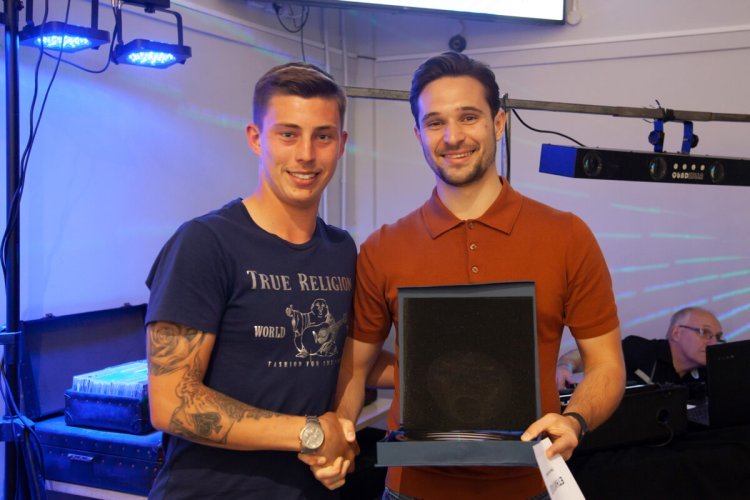 Operations Manager Sarah Quinn made the presentation for the Sponsors' Player of the Season to the Stags' veteran striker and erstwhile emergency goalkeeper Brett Williams. In addition to leading - together with Ade Olumuyiwa - the PRO:DIRECT Academy team to the Tactic League T1 South title in their first year, the former Reading and Torquay United man played in virtually every outfield position during the course of the season, including centre-back at Frome Town and between the sticks at St. Mary's Stadium - and still found time for a short loan spell at Lymington Town. He scored 12 goals for the Stags this season, plus one for Lymo, and kept a clean sheet in the Cup Final. 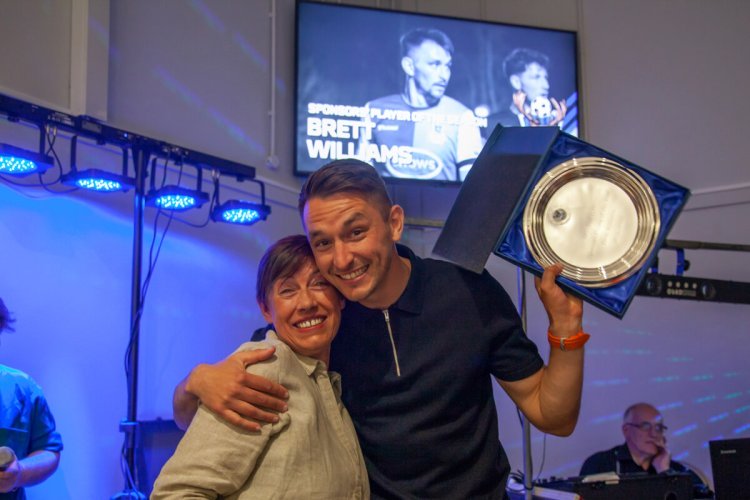 Sarah Quinn presents the Sponsors' Player of the Season award to Brett Williams.

The final award of the night was another big one that needed a big personality to present it. Step forward Stags fan and AFC Totton Darts team captain Ron Atwill, who had the pleasure of awarding Ethan Taylor with the Supporters' Player of the Season award, making for a double on the night and, in addition to the Man of the Match award in the Southampton Senior Cup Final, rounding off a unique hat-trick of individual awards for the lad with the lethal left-foot.