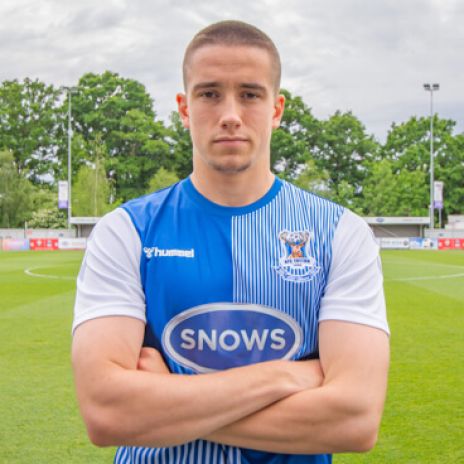 Originally a forward, 19-year-old Luke Hallett, who is a former member of Southampton’s Academy, was converted into a defender by Jimmy Ball when the Stags manager was Luke’s boss at Forest Green Rovers in 2021.

Hallett grew up in Netley and played youth football with Sholing, in addition to his spell with the Saints. He then joined Forest Green’s academy and made his first team debut for the Green Army in EFL League Two as a substitute against Stevenage in early-March 2021, before signing professional terms with the club that summer.

He spent the 2021/22 season on loan with Gosport Borough in the Southern League Premier South, making 37 appearances and scoring 6 goals in all competitions for the Privett Park outfit, although the terms of his loan meant that he was ineligible to face the Stags when the two sides met in the Hampshire Senior Cup in December 2021.

In addition to having worked with the Totton manager before, Hallett is also a former schoolmate of Ethan Taylor and played alongside Jake Adams during their shared spell in Southampton’s youth ranks. His fellow new-signing Mike Carter was his captain at Gosport last season.

Tall and athletic, Luke was described on his former club’s website as a hardworking, determined player blessed with the happy knack of getting on the end of crosses from set-pieces.