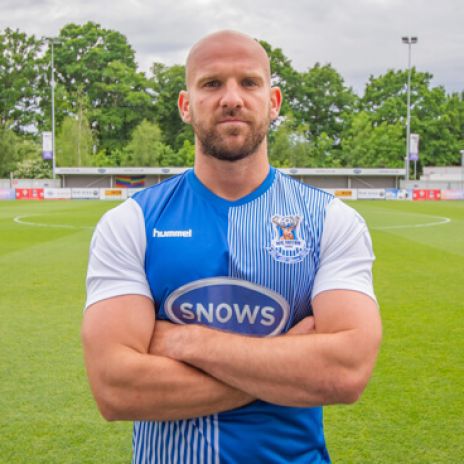 30-year-old central midfielder Mike Carter brings a wealth of experience to a generally young Stags squad that will be looking to do significantly better than last season’s 6th-place finish.

Mike began his non-league football career with Sholing, winning the FA Vase with the Boatmen at Wembley Stadium in 2014 before moving to Gosport for the first of two spells at Privett Park, during which they lifted the Hampshire Senior Cup and the Russell Cotes Cup, in 2015 and 2016 respectively.

After two-and-a-half seasons with the Boro’, he signed for Havant & Waterlooville in January 2017. He won back-to-back promotions with the Hawks, as they were crowned Isthmian Premier League Champions in 2016/17 and then lifted the Conference South title at the first attempt in 2017/18.

Upon his return to Gosport in 2019, he was made captain by manager Lee Molyneaux, and helped them to a top-half finish in the Southern League Premier South in 2021/22.

An early injury brought a premature end to his involvement in the Hampshire Senior Cup meeting between Gosport and AFC Totton at Privett Park in December 2021, but the combative Carter knows Harry Medway from their time together at the Boro’ and Adam Tomasso from a short period when they were both on-loan at AFC Portchester. He has also played alongside James Taylor – Ethan’s father – who was a firm Stags fans’ favourite.

Prompted to make the comparison, Mike, who is 5’11”, likens his style of play to that of Southampton’s Spanish midfielder Oriel Romeu, who he also partially resembles with his toned physique and shaven head.